Little things can make a difference in Imo 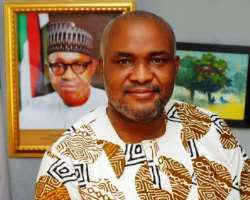 As someone with a passion for travelling to Imo state from time to time from my base in the nation’s capital, I had one of those opportunities to travel to Imo state last week and arrived in safety even amidst the heavy rain fall in Owerri, the Imo state capital.

Although, this time around my trip was an official one in that I was at the head of a delegation of Human Rights Writers Association of Nigeria (HURIWA) that organized strategic media intervention and interface in Owerri, the Imo state capital to ascertain the level of preparedness on the part of the civil populace for the commencement of the next level of operation python dance of the Nigerian Army which has just been changed to operation Atilogwu Udo meaning exercise dance for peace in South East of Nigeria.

The opportunity of this trip to Imo state was also used optimally to obtain first hand, the pulse of the citizens on the new administration in the state and to see for myself the unprecedented decadent state of infrastructures of the South East of Nigeria with specific reference to legendary collapsed road networks not just in Imo state but in the entire five states of the South East except Ebonyi whereby the governor David Umayi is reported to have done a good number of roads for his people even with his unpopular and substantially irrational stand that president Muhammadu Buhari should not be castigated.

This time also, this writer used the opportunity of the trip to Imo state to let people be aware that there is no possibility in this world for government to claim to be positively inclined to protecting and promoting the fundamental human rights of their citizens if there is no deliberate state wide policy to physically fix the broken down public infrastructure beginning from the health, education, roads, food security and security of lives and property.

So, these critical factors of human rights of the people are indeed facing the existential reality of complete non-compliance on the side of these state governments.

From Owerri, to Okigwe or to Orlu which in the best of times should not take up to 45 minutes to commute from Owerri, now takes a traveller about three hours due to the grueling and pathetic poor state of state owned and federal built roads. The Owerri to Okigwe road is one of the only few Federal government constructed road infrastructure that goes through Owerri to either Aba or Porthacourt.

The other federal road infrastructure is that which leads from Onitsha to Owerri and the other that leads from Umunze to Arondizuogu and then to Owerri. These Federal roads have all but collapsed leaving in their trail, huge gullies and deep rooted pot holes that are the only characteristics that remind any traveller that there once exists some form of modernity by way of functional roads.

If the people are not guaranteed their fundamental freedom to move from one point to another due to lack of any kind of road infrastructure, how then can we even say there is any form of civilization or government in place? Another factor that hinders the free movement of the citizens in the South East with specific reference to Imo state is the current situation of armed criminal extortions and harassment by the police/soldiers of the citizens.

There is now the menace of over one hundred police and military checkpoints in all of Imo state even as these armed security forces spend the greater part of their official time harassing the people and extorting them of their hard earned finances. This is perhaps one of the most severe threats to the attainment of respect for the fundamental rights of the citizenry which the state and national government must resolve.

The irony about these large numbers of armed security checkpoints in Imo state is the failure of these security agents to crack almost all of the assassinations and kidnappings that took place in the last one year especially along the stretch of road from Okigwe through Arondizuogu to Ideato north local government whereby not less than half a dozen innocent people have lost their lives including the then chairman of the local wing of All Progressives Congress.

What then is the essence of having an overwhelming number of armed security forces all around the collapsed roads in Imo state even as criminals seem to have free reign?

These questions came up during the media interactions yours faithfully addressed last week in Owerri in which as an organization we asked the people of south east of Nigeria to provide support to the Nigerian Army as it stages the next phase of military operations next month.

There is therefore the need for the military’s high command to work out strategies for fishing out all the bad eggs that have infiltrated the security forces and by their criminal conducts have unfortunately created the damaging image of the Army as an occupying force.

The people of Imo state as well as those who reside in other south east of Nigeria must be made to view the Nigerian Army not as internal oppressors but as the integral members of the same humane society.

Back to the issue of lack of free movements in Imo state due to poor state owned roads, there is need for the government of Mr. Emeka Ihedioha to quicken the process of infrastructural governance by fixing the broken roads network all around Imo state.

The idea of waiting for the rains to stop before doing anything about the poor state of roads makes no meaning because all around the world roads are built all year round. For instance whenever floods washes off bridges and roads in Europe and America, the government do not fold hands and wait for dry season before fixing back the broken infrastructures.

The excuse by governor Ihedioha that he is waiting for dry season to fix the collapsed state and local roads makes no sense just as the federal government needs to be reminded that the people of south east of Nigeria are not conquered population but citizens with equal rights of citizenship with all other parts of Nigeria. The idea of allowing all the federal roads to collapse without doing anything about it is an act of wickedness.

President Muhammadu Buhari and his works ministers should practically put measures in place to physically rebuild the collapsed federal roads in the entire south east of Nigeria. It is a big shame that the Okigwe to Owerri road that looks like the most compact federal government road in Nigeria has been left to collapse thereby forcing commuters to go through hundreds of villages and township roads just to make it to Owerri.

The Okigwe to Owerri federal road and how it has been left to deteriorate has depicted a nation whose political leadership only believes in propaganda and the spreading of fake news regarding the yearly implementation of the budgets which runs into billions for roads every year.

Looking at the half year allocations from the Federation Account Allocation Committee, in the current budget circle whereby Imo state received #50.18 billion, it is unconceivable that the Imo state government is yet to begin any real practical work of rebuilding of the destroyed infrastructures which the immediate past Rochas Okorocha’s administration bequeathed to the current government.

There are so much bottled up anger and a high level of expectations from the current Imo state government from the oppressed people. Let the people begin to witness real governance in all realms in Imo state. There is the need to enforce traffic laws in Imo state and to restore order on the roads to check the high rate of urban accidents. There is the need for Imo state government to setup workable feedback mechanisms so people who get harassed by the police and other security forces can ventilate their feelings. These things matter a lot.

I do not think that the anti-graft body the EFCC is telling Imo state people the whole truth on their efforts to recover assets stolen by individuals in the last administration in Imo state.

Most of the assets that EFCC told us they confiscated from the last governor of Imo state Mr. Anayo Rochas Okorocha are not in any way sealed because one of those assets near the so-called Akachi statue is still in business.

The Economic and Financial Crimes Commission must come clean on the investigation of the petitions against Rochas Okorocha. Then the Imo state current governor needs to stay back in Owerri and Imo state to rebuild the state.

Globetrotting in the name of seeking for foreign direct investors to come to Imo state will end up the same way that all other governors deceived the people and never attracted even one Chinese trader to Imo state.

Emeka Ihedioha should be told that just little things matter so much in Imo state. Imo citizens are not greedy. Imo state citizens are hardworking and will need a government that works in real time so the economy of the state and the wellbeing of the people can be advanced..

The people are yearning for good governance and not governance by propaganda just as the governor must be ready to hear the hard facts and must keep praise singers far from his office.

As one author wrote not long ago, “Good followership is a principle of good governance. This followership is elicited and promoted by the attitude of those in governance. If the citizens are regarded to as the source and essence of power of governance and focus of state craft directed at satisfying their aspirations, a good followership that is supportive would be achieved.. If their freedom and rights are guaranteed, their opinion respected and those in power deal honestly with them, supportive followership will be entrenched in the political community.”

“Supportive and responsible followership starts with sincere participation in political activities like party organization, exercise of franchise, civil obedience to laws, programmes, policies and protest against obnoxious ones. Good parties are sustained by good party ideologies and manifestoes as galvanized by members,” (Good Governance; Theory and Practice by Samuel Anayochukwu Eziokwu).

Let Emeka Ihedioha and those who call the shots in Imo state look up to the Ethiopian Prime minister as a model of good governance who did not wait for long before he made impacts.

As reported rightly by BBC, the pace of change in Ethiopia has been so fast since Abiy Ahmed became prime minister in April 2018 that it is almost like observing a different country, and this is why he has been awarded the Nobel Peace Prize.

The reforms he has introduced were unthinkable not so long ago.

For many years, the government seemed impervious to criticism from human rights groups that the state stifled free expression, sidelined and imprisoned opposition leaders and cracked down on protests.

In the first few months after he came to power, following the unexpected resignation of his predecessor Hailemariam Desalegn, Mr Abiy lifted the state of emergency, ordered the release of thousands of prisoners, allowed exiled dissidents to return home and unblocked hundreds of websites and TV channels.

These innovative solutions can be implemented in Imo state to repair the rot and ruins left behind by Rochas Okorocha who misrule Imo state for 8 years. Emeka Ihedioha must succeed because Imo can't afford another failed leadership even for three months. Emeka Ihedioha should make hay whilst the Sun shines.