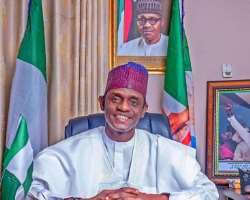 Geidam Central Market was said to have been closed down following Boko Haram insurgents attack on the town on 23rd January 2019.

The Nigerian Voice reports that since then, economic activities of the area was paralyzed with intense pressure on the state government by the community to reopen it.

The governor disclosed the reopening of the market Monday during a town hall meeting with the Community leaders in Geidam Town today Monday.

According to him, prior to the opening of the market , he has consulted with President Muhammadu Buhari, Chief of Army Staff Lt. Gen. Tukur Yusuf Buratai, Chief of Air Staff Sadiq Abubakar, Director General Department of State Services and the Inspector General of Police, Muhammed Adamu among other critical security stakeholders on the reopening of the Geidam Central Market and consequences of leaving it closed.

At the forum, he further directed Geidam Local Government Council Chairman , Dr. Mulima Mato to employ 150 Vigilante to compliment the efforts of the Military and Police providing security at the market .

Gov. Buni also relaxed the curfew time in Geidam Town from 5:00pm to 10:00pm in order to ease economic and social activities.

He further said that on 4th November 2019 , “the IG will be visiting Yobe State to witness the flag off of the distribution of operational vehicles to the police, military and Vigilante in order to boost their morale”.

The Geidam Consultative Forum Secretary, Umar Bako Geidam commended the governor for reopening the market, “it will go a long way in alleviating the sufferings of our people, now our economy will be restored", Umar said.