Man arraigned in court for causing trouble in Osogbo 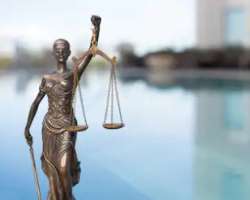 The Osun State Police Command has arraigned a 45-year-old man, Orewole Ayodele in court in Osogbo, the capital of Osun State for causing trouble.

The prosecutor, Lamidi Razaq told the court that the accused person forcibly entered into a land belonging to Alhaja Fausat Bolanle Sarumi and denied the owner access to her property.

Lamidi stated that the offence committed by the accused which is contrary to and punishable under section 81 & 249(d) of the criminal code Cap 34 vol. II of Law of Osun State of Nigeria, 2002.

The accused pleaded not guilty to the offence levelled against him.

In his ruling, Magistrate Modupe Awodele granted him bail with N500,000, and adjourned the case to 5th of November, 2019.