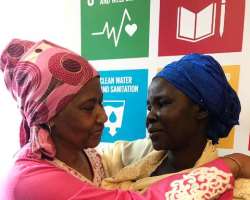 As we celebrate world mental health day, some of the biggest survivors of trauma in Nigeria may finally be getting therapy and mental health treatment.

When 51-year-old Yana Galang smiled as she got off the plane at JFK airport and into the baggage claim area, it might have been her first truly genuine smile in a long time. Yana was smiling at 38-year-old Joel Benson, the producer of the 2019 Venice Lion award-winning 'Daughters of Chibok' who has become like a son to her. Yana was in the US to speak to world leaders about her daughter Rifkatu and 111 other schoolgirls from 219 female students who were in captivity after extremist group Boko Haram attacked the town of Chibok in Borno State, Nigeria. Joel and Yana at the UN.
2000 days after the unfortunate kidnapping incident, Yana Galang and other parents have received no therapy or psychological support after the traumatizing experience of kidnap and insurgency.

Life has not remained the same for Galang and the other mothers who have not given up hope that their daughters will one day return to them. The last time Yana heard anything about her daughter was two years ago after some of the girls were freed in May 2017.

Out of the 219 girls kidnapped by Boko Haram, 107 have so far made it home: four of them by Nigerian military/ para-military intervention, and 21 of them were initially released on October 2016 after negotiations between the Buhari administration and Boko Haram, 82 more would later be freed in May 2017’ according to a CNN report

Speaking to CNN’s Zain Asher in an interview while on the UN trip, Yana says “The Nigerian government has tried their best and have become silent. We haven't heard anything about our children. We want assistance from other countries to make the lives of our children better. One of the girls that was rescued two years ago said my daughter and the other girls are still alive and suffering in the bush. Rifkatu is still alive, many of the girls are still alive. I want this trip to make people start talking about it and maybe there will still be hope to rescue our girls”. Behind the scenes: Yana and Joel being interviewed by Zain Asher

Mental health is not taken seriously in Nigeria. According to a statistic from The Guardian, UK ; “In Africa’s most populous nation – a country of more than 200 million people – there are an estimated 150 practicing psychologists.” Even with an improvement in the last couple of years,

Psychological trauma can leave people struggling with upsetting emotions, memories, and anxiety that won’t go away. From feelings of numbness, disconnectedness, Whether the trauma happened years ago or yesterday. It is even worse for these parents who have unresolved situations with their daughters.

Speaking to Stephanie Busari, CNN’s Nigeria based bureau chief and Supervising Producer, Africa who has been one of the biggest advocates of the Chibok girls and has taken keen interest in the story ever since she first covered it as her first story for CNN in Nigeria.

She says; “Being in New York with Yana, it is evident to see that the trauma of losing her daughter is just bubbling under the surface. One minute she is laughing and trying to live a normal life, the next the tears are just flowing as she remembers her daughter. She is an extremely resilient, dignified and strong woman, but I know she sometimes has trouble sleeping and the toll on her mental health has been huge. Many of the Chibok parents have died due to stress-related illnesses and the trauma of losing their children. Losing a child is one of the worst things that can happen to a parent. They need our help, now more than ever.”

Stephanie was instrumental in helping Yana get to the UN. Joel Benson who spoke about the UN General Assembly trip said; “Stephanie has covered this story for years so when she interviewed me for the CNN piece about my film, she wanted to see how she could help further. She was already going to New York and so she helped secure meetings with key people at the UN. She was very instrumental in helping us with the trip and her passion for helping Yana and the Chibok families is very obvious. Everything happened so fast and we might never have been able to achieve this without her” Yana and Stephanie at CNN New York.
How does the UN trip help the Women of Chibok?

For Yana, the main goals of the trip was to get more people talking about her daughter and other missing Chibok girls; seek the support of world leaders in addressing the issue and restoring hope for the other women of Chibok.

On the trip she met with the newly appointed Under Secretary of the UN, Melissa Fleming; the executive director of the UN Women, Phumzile Mlambo-Ngcuka; and other world leaders who pledged their support in bringing the issue to the front burner, providing psychological support and therapy for the Women of Chibok; helping them make their main source of livelihood, farming more sustainable and profitable and also improving education for the girls from the Chibok area and the northeast in general.

Yana was also at the Most Influential People In Africa (MIPAD) event to seek support for the cause. She was also interviewed by CNN in New York, Guardian UK, a Chilean publication and the UN News team for distribution on all their platforms. It achieved a key aim of bringing the issue back to the public arena.

The new champions of Chibok: Making the UN Trip happen

Stephanie Busari, Joel Benson and Governor of Lagos, Babajide Sanwo-Olu have emerged as the new champions of Chibok.

Joel Benson who runs a virtual reality film studios, VR360 in Lagos, Nigeria has through his 2019 Venice Film Festival Award-winning documentary “Daughters of Chibok” reignited local and global interest in the rescue of the chibok girls and in the economic plight of the mothers who are still in Chibok living under hard conditions.

Speaking to Zain Asher, he said; “These women, the parents of these girls are living in pain and poverty and it’s wrong on so many levels for us to just move on. 112 girls are still missing. In any society where things are done right, things should come to a standstill until the girls are found.” Joel Benson and the Governor of Lagos, Babajide Sanwo-Olu at UNGA.

Babajide Sanwo-Olu, the Governor of Lagos after he heard about Joel’s documentary and the opportunity to raise more awareness for the cause at UNGA decided to support.

Talking about it, Joel says “The Lagos state government’s intervention was a big blessing and I am happy he took keen interest in this. They were really impressed with the award we won and our goals for the project. The documentary talks about the kidnapping and draws attention to the plight of the women in Chibok. It’s the first VR film from Africa to premiere at the Venice Film festival and to win a Venice Lion.

I am very grateful to the governor and the state for sponsoring my trip and that of my assistant to show our VR documentary to world leaders. Lagos and most parts of Nigeria have been a bit cut off from the plight of the women of Chibok but I hope this will be the beginning of a more unified reaction from other parts of the country”.

How can other Nigerians and the world help?

Two of the most active voices in Nigeria for the cause have been Aisha Yesufu, co-convener of the Bring Back Our Girls movement and former presidential candidate, Oby Ezekwesili. They have been actively engaging the government and keeping the flame alive. In marking the 2000th day, Aisha and her team tried to convey a rally at the Unity Fountain in Abuja but were unable to as a result of a government barricade. The conversation needs to continue. We must never forget this. We must put pressure on the government and do our parts as citizens

For 5 years the women of Chibok have been dealing with the trauma of not seeing their children without any mind paid to their mental health. They have not received therapy and psychosocial intervention.

Joel also believes financials support via donation platforms Paystack and go-fund-me for local and international donations can go a long way in making life easier for the women.

Special interest from local and international organizations with tangible impact will definitely help change the existing narrative of Chibok from a story of death and sadness to one of hope and joy.