By From: Globen Globen 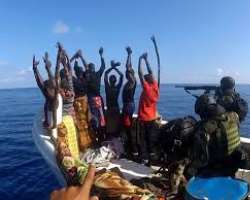 Concerned indigenes of Bonny under the aegis of Bonny Stakeholders Vanguard (BSV) have threatened to shut down movement, and boat shuttles of Nigeria Liquefied Natural Gas Company (NLNG) should the deplorable security situation in Bonny Island continue unabated, without security intervention.

The group who gave this indication has also accused security agencies especially the Police, Marine Police and Navy of complicity in protecting perpetrators of crime and violence on the Island.

Spokesperson of the group, Elder Igoni Hailsham, during a press conference in Port Harcourt said one would have expected the police to openly condemn, investigate and bring to book perpetrators of such crimes rather than open their arms to embrace criminal accomplices, a clandestine move that stinks to high heaven

Hence, they are calling on the Inspector General of Police, and the Chief of Naval Staff to investigate why the police shield criminals and the Navy and marine police have refused to act on the wave of sea piracy on the Island, expressing concerns that those who are allegedly involved in various degrees of criminality and gun-running on the Island are continuously shielded from public prosecution by criminally minded security operatives.

Elder Igoni explained, “we have evidence of cult activities on the Island by two rival groups, the Icelanders and Greenish. According to him, on October 1st, two members of the Icelanders were seen shooting live ammunition in the air, leaving used bullets littered around the floor. Reports were made to the relevant security agencies in the LGA, but no action to date has been taken. Presently the security is aware that one of the persons involved with this shooting and disturbance of public peace is taking refuge in Oguede one of the suburbs in Bonny but has deliberately refused to go for him.

For Ibimina Benstowe, a resident of the Island, “it is an irony that the same group of persons involved with sea piracy, kidnapping, raping and various other social vices are the same people demonstrating in Bonny against insecurity." Who are they deceiving? “It is provocative that on a daily basis, groups are rising on the guise of protesting for Bonny kingdom security. The question is on whose interest?”. “There must be decorum, any organization that is not recognized by the kingdom cannot protest on their behalf without their approval”, adding that these misplaced protests amount to total disrespect for his majesty and the kingdom.

Leaders of the two main cult groups (Icelanders and greenish) have been alleged to now forcefully been collecting homage from Okada, Keke, boat and taxi riders, including from various fuel dumps and are responsible for the recent wave of sea piracy in the area.

Similarly, Mr. Charles Hart has called for reposting of officers of the marine police who have served on the island for over two years. He said some of them had developed serious relationships with the criminals that they cannot go after them. He said the gunboats are lying fallow while the boys have continued their raid on defenseless citizens on the sea, adding that there is a need to put the gunboats into judicious use.

He said Bonny had been a very peaceful enclave in the Niger delta and wonders why the explosion of criminality now that NLNG train 7 is about to commence. According to him, Bonny people must be told of the security measures on the ground to stem the wave of criminality. As a people we are demanding the Environmental Impact Assessment report as it concerns security, this must be made public to ascertain the preparedness of security to tackle issues of security beyond the train 7 sites but also in the entire Bonny kingdom.

In another development, a member of the group, Allswell Pepple said there has been move for a peace accord between the rival cult groups to stem the spate of shooting on the island, initiated by a special Bonny kingdom security team. However, a lot of stakeholders have countered the move saying that the Bonny kingdom security committee should step aside and hands-off any peace accord with the cult groups because there is a gun-running issue involved. They rather advocated that a special security squad should be brought in to fish out those cultists involved with arms to stem the tide of criminal tendencies in Bonny once and for all.

According to Joshack Tobin from the Finima community, the last time a peace accord was reached between cultists, a lot of insane privileges were accorded them at the detriment of graduates who should ordinarily merit such privileges, thereby giving them undeserving rights. They say the security forces must do the needful to address this critical issue.

Finally, the stakeholders wondered why the Special Squad of the Inspector General Police drafted to troubled areas in the country have not been sent to Bonny Island in dare need and have been experiencing sustained onshore and offshore criminality. They said with the NLNG train 7 by the corner, nothing can be more proper than to draft that special squad to tackle criminal elements on the kingdom.