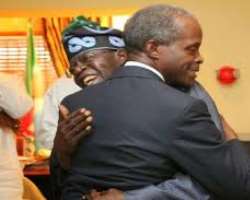 The game of power is always an high stakes poker game, in which the players are routinely devoured or sacrificed, to meet the primordial instinct of man to be prime in leadership. This has been the case between the powerful forces of Lagos politics, led by Senator Bola Ahmed Tinubu (BAT) against the credible and widely loved Vice President Yemi Osinbajo.

Sources close to Bourdillon camp, believe the Asiwaju group grew increasingly frustrated with the Vice President, as he challenged the street credibility of Asiwaju with his promotion of the award winning Social Investments Program which has endeared him to the masses. Sensing a steady decline to oblivion and decreasing relevance, he mused to aides that he “made Yemi, and will unmake him” at a time of his liking.

The final resolve to attack the Vice President came when Asiwaju as he usually does, commissioned an opinion poll seeking to test his popularity against the Vice President. He was said to have lost widely. The poll showed the Vice President was rated Presidential material by eighty percent of respondents while the former Governor scored twenty percent. The biggest weakness of the former Lagos Governor was pinpointed as his long track record of deal making and corruption. To this end, the former scion of Southwest Politics decided it was safe to drag the Vice President into the gutters, and seek to discredit and delegitimize him in the eyes of his principal and the masses.

The first salvo were fired when Asiwaju sensing an opportunity to team up with the Aso Villa Cabal, pushed to strip the Social Investment Program from the Vice President’s Office while diminishing his role in economic management. Naturally, the red cap Chief of Staff being a willing tool and Machiavellian, as he had been seeking to cut the Vice President to size, went for the jugular using the cost of running the Vice President’s Office as an excuse to diminish him working with Babagana Kingibe who is said to be nursing an ambition to run with Asiwaju or be on top of the ticket come 2023.

Without missing a beat, the President however curtailed the excesses of the trio after his U.N. Trip, siding with the Vice President on keeping a sizeable team while continuing to support his work at the National Economic Council. The President also assured the Vice President in several private parleys that he was going to give him more assignments to incubate major government initiatives in this new term in line with his successful incubation of SIP.

Seeing that they failed woefully, and sensing the rise of sympathy for the Vice President across Nigeria arising from their victimization of his person, the trio had engineered various false publications that there was corruption in Social Investments Program, the same week the program garnered international awards, Presidential mention at the U.N. General Assembly and nod to be institutionalized for having being so successful at pilot under the Vice President. Indeed, the quick retraction by Vanguard Newspaper of the libelous and false claims against the Vice President further diminished the trio in the eyes of close watchers who always suspected the emerging conspiracy.

The second story that was engineered also by the trio and fed through Vanguard newspapers, supposedly about FIRS and its Chairman, Mr. Fowler, stashing money away for Osinbajo’s 2023 run, also ended in disgrace. In case, it was hinted that a popular lawyer confronted Asiwaju on the matter that since his name was mentioned in that piece, why was he not quick to clear his name instead of circulating false claims on the Vice President. Asiwaju responded that everyone knows he was a dirty politician and Osinbajo however must be destroyed. Clearly, matter had come to head.

Boasting to several important players in Lagos politics early last week, Asiwaju indicated more dirt was coming and will be thrown the way of the Vice President. It is now well known in his circle that he is shopping two major petitions to anti-corruption agencies including the EFCC, against the Vice President one predicated on the widely discredited PDP House of Representatives probe of his approval of NEMA emergency intervention while he was Acting President.

But just like the trap set by a conspirator is likely to catch a relative, this particular one may catch Abba Kyari, the red cap collaborator of Asiwaju Tinubu, as in his position as Chief of Staff to the President, he was deeply involved in the process of approval and also ensured to delegate one of his major man Friday in Farouk Gumel, to oversee the procurement as opposed to the Vice President’s legal and arms length approval. The relationship between Farouk Gumel, a shadowy character once indicted in Stella Oduah fraudulent reign at Aviation Ministry, but who now operates as Dejure Senior Counsel to the Chief of Staff is a story for another day.

Things may however heat up in coming weeks as deep security sources confirmed that Asiwaju Tinubu recently hired Senior Israeli investigators to unmask the Vice President, while running major online insurgency operations against the Vice President’s reputation. Time will tell if the parable of the masquerade acting like god who was disrobed as foretold by a diminutive Northern Governor will catch up with Asiwaju Tinubu and his co-conspirators.

Tanko is a Senior Investigative Reporter based in Yola