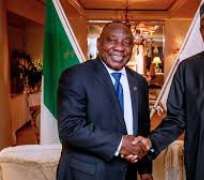 The foremost civil Rights advocacy platform in the country – HUMAN RIGHTS WRITERS ASSOCIATION OF NIGERIA (HURIWA) has dismissed the current diplomatic shuttle of President Muhammadu Buhari to the xenophobia infested South African nation as exposing Nigeria to international ridicule and cheapens the rating of the country before the eyes of the world.

The Rights group condemned the lack lustre approach of the federal government towards the persistent xenophobic killings of Nigerians by black South Africans in South Africa and wondered why the Nigerian president proceeded with an earlier planned visit to South Africa even after the latest round of xenophobic violence. The group stated that the Nigerian President couldn't have gone on this visit but would have explored the African Union and the United Nations to arrive at concrete actions to end xenophobic violence in South Africa instead of visiting the same place whereby hundreds of citizens were displaced and many killed as if the victims of such a devastating crimes are now supposed to beg the aggressors.

Accusing the media managers of both the presidency and the foreign affairs ministry of not being economical with the truth and engaging in double speak, HURIWA said it was totally incorrect that the government lied to Nigerians that the current visit to South Africa by president Buhari was because of the recent xenophobic violence arguing that that shouldn't have been the case, because if it is then the president couldn’t have embarked on signing of bilateral agreements with the south African president and even reprimanding the frightened Nigerians in South Africa but would have gone ahead to protest the destruction and killings of Nigerians in south Africa and to demand compensation for the victims of the xenophobia. There was absolutely no need for this patronizing and cheap visit by the Nigerian President to the same Country that have killed our citizens. "This visit of President Muhammadu Buhari to South Africa doesn't just add up except there are Other personal issues that the Nigerian President went to attend to in South Africa but the way he has conducted the thoughtless visit is disastrous."

“This current federal administration is either very poor in keeping records or may actually be viewing Nigerians as zombies. Months ago, in fact last year June or July, the government announced that the South African president who had visited Nigeria had invited president Buhari to visit South Africa. but months after that visit by Cyril Ramaphosa to Nigeria, black south Africans staged the latest rounds of xenophobic violence in which many Nigerians were wounded, their hard earned business assets either burnt, stolen or destroyed and over one thousands of them were flown home due to the generosity of the Air Peace airlines with the authorisation of President Muhammadu Buhari. But president Buhari’s officials went on to lie in between their cheeks that the visit of president Buhari which was earlier scheduled was now no longer on the strength of the earlier reciprocal invitation by south Africa but was to protest the xenophobic killings. But from all indications and by their own reports, the president only just mentioned the matter of the xenophobic killings in passing; but actually demonstrated that he was in south Africa on an elaborate state visit with the signing of several bilateral trade treaties . This is not how to speak out and defend our citizens who have lost their lives and livelihood.”

“Be that as it may, let us assume that the Nigerian president is visiting South Africa because of the xenophobia, we think the current federal administration is handling that matter with kid gloves. How can the Nigerian leader visit the same country from where hundreds of our citizens were displaced and chased away? Nigerians expected strong reaction such as instituting petitions against South African government in African Union and the United Nations so a lasting solution is found. Why should the Nigerian president be seen behaving like he needs to beg the aggressors who have the blood of our citizen in their hands? This is pathetically disappointing and violates our constitutionally guaranteed foreign policy objectives which primarily speaks to the issue of protecting Nigeria's national interest and Nigeria's prime interest is the protection of the lives and property of the citizenry because the primary duty of government is the protection of life and property of Nigerians and the enhancement of their wellbeing as stated in section 19 of the constitution.”