Alleged Cultists Arrested In Maiduguri: Management Of University Of Maiduguri Cautions The Public

By UNIVERSITY OF MAIDUGURI 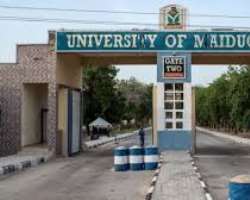 Our attention has been drawn to a report on Sunday 22nd September, 2019, that eighteen members of an alleged cult group called Neo Black Movement of Africa World-wide were arrested at a place called Baghani Hotel by ajoint team of security operatives on the extreme end of Abuja Talakawa (about thirty kilometres away from the university campus). It was further reported that the alleged cultists, who were said to have included some University of Maiduguri students and other categories of persons, were apprehended while performing initiation rites on new members.

Since the report of the incident was made public by the Nigeria Police Force, Management has been cooperating fully with all security agencies. In view of the sensitivity of the matter, Management had decided not to make any public statement so as not to jeopardise the ongoing investigation.

Unfortunately, as we await the outcome of the investigation, a number of concerned stakeholders, including friends of the University, have been expressing serious concern about reports on some social media alleging that University of Maiduguri students/staff who are on payroll of Boko Haram rounded up! and that they are insiders, informants. Such gargantuan claims, coming shortly after the recent attack on the university campus by persons suspected to be Boko Haram insurgents, are capable of misleading members of the general public, particularly parents, guardians and government institutions into unfounded conclusions about the roles of staff and students in the unfolding insurgency.

It needs to be clarified that since the outbreak of the insurgency in 2009, the University Management has never found any credible evidence implicating any of its staff or students as a collaborator/informant in the conflict, as it is being alleged online.

Meanwhile, the Nigeria Police has officially confirmed to the University that This office is investigating the above captioned offences against the above listed suspects who claim to be your students . Therefore, in view of the gravity of the allegations, Management maintains its position not to interfere with the on going process of investigation. Parents, guardians, stat?" and students are hereby assured that the University will take all necessary steps to ensure strict enforcement of its widely known anti-eultism rules and regulations as well as the safety and security of their wards.

As we await a formal report from the Nigeria Police Force, members of the public are strongly advised to disregard the current unfounded claims, rumours and uninformed commentary on the social media about the issue.