By Muslim Students' Society of Nigeria 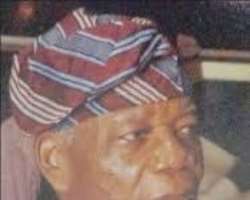 The Muslim Students' Society of Nigeria, Lagos State Area Unit has mourned the death of the the Deputy President-General of the Nigeria Supreme Council of Islamic Affairs, Alhaji S.O. Babalola.

Babalola, who is also the President of MUSWEN, died on Wednesday morning, according to the NSCIA.

While consoling the family of the deceased and the Ummah, President of MSSNLagos, Saheed Ashafa, said Babalola's contributions to Islam and humanity would forever be remembered.

Ashafa also prayed to Allah to grant the deceased family the fortitude to bear the loss.

Noting that Babalola died when men of his calibre were mostly needed, Ashafa urged other notable Muslims to emulate Babalola's philantrophic gesture.

He said, "We have lost another defender of truth and a selfless leader at a point when Muslims are going through very tough times in the South West and Nigeria generally. However, Allah knows best.

"Alhaji Babalola is a magnanimous philanthropist who has has brought smiles to the faces of indigent students within and outside his local community.

"Beyond Islam, he is considered a major contributor to the development of infrastructure in higher education sector in Nigeria.

"He impacted tremendously on Islam and humanity with the belief that we came to this world empty-handed and we shall return to God empty-handed. He has given so much to life, and we pray to Allah to accept his deeds and forgive his shortcomings."