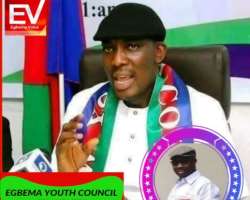 Few hours after president Muhammadu Buhari, addressed Nigerians on the country's 59 years, the Ijaw Youth Council (IYC), said the president's speech should be thrown to the dogs.

In a press release Tuesday even signed and made available to our correspodent in reaction to the speech, the IYC president, worldwide, Pereotubo Oweilaemi, Esq., said the country do no deserve dictatorial style of leadership.

Oweilaemi, argued that the country is presently at crossroad as the body language of Mr. President shows division.

"President Buhari's independent day speech is more of a threat of violence to the people he has sworn to protect. Nigerians don't need iron cast governance. This Country has never been more divided than now. We need a President that will play fatherly role to all and sundry. IYC views Mr. President's speech as a declaration of war against Nigerians".

The Ijaw Youth leader said Buhari's directive to security operatives to deal with hate speech squarely in the social media is tantamount to anarchy.

"The issue of dealing with hate speech though is commendable under a democratic setting, the Government should not take action in flagrant violation of the nation's laws. Given a blanket order to the security agencies to deal with hate speech in the social media will reduce Nigeria to a police state where the rule of force takes the place of rule of law. Every law enforcement process should be dictated by the Constitution. The judiciary should also be given an unfettered hand to operate. That is only when such an order should be passed".

On the charge that Nigerians should deviate from lawless habitats, the erudite legal luminary, said: "Our position is that Nigerians would have appreciated his advice better if Mr. President directed his speech to the overbearing security agencies who are abusing their privileged positions with impunity. The most lawless set of people in our country are the security agencies, especially the DSS and the police. These people use crude methods to enforce the nation's laws which are not known in our jurisprudence.

"How can the ordinary man obey the law when the man who is to enforce it is flouting the law with levity? He asked.

Putting the record straight on Buhari's claim of militancy in the Niger Delta, the apex Ijaw youth decision making organ hinted: "We feel that President is just beating the drum of war for nothing. There is no militants' activities in the Niger Delta. The issue of militancy has since been resolved in 2016 when leaders of the region represented the agitators to broker peace with the FG.

"Based on the assurance of the Federal Government to address some of the demands of the region, especially the issues of modular refinery, relocation of oil companies head offices to the region and massive infrastructural developments, the militants have since given peace a chance to allow the Government fulfills its bargain.

"Niger Delta people only expected President Buhari to tell the world the progress report of its promises to the region. Instead of addressing the identified issues, our President is threatening to unleash mayhem on our peaceful communities. That is a war of aggression against Nigerians. What is our offence for this new threat of violence?

While tongue lashing Mr. President over the alleged massive corruption taking place in the Niger Delta Development Commission (NDDC), Barr. Oweilaemi, said: "If given administrative control of the NDDC to the Ministry of Niger Delta from the office of the Secretary to the Government of the Federation is for it effective management as Mr President has said then we have no problem. NDDC is swimming on a cesspool of corruption. The Commission needs proper monitoring.

"Lastly on the transfer of NSIP from the Vice President's office to the Ministry for Humanitarian Affairs, Disaster Management and Social Development, if the gesture is to achieve optimum management then we have no problem with it. Otherwise, we would raise eyebrow that the Government is emasculating the Vice President for obvious reasons", he said.