…..Says the rumour is out there to mislead people and misrepresent the facts
By hector spiff 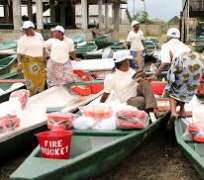 Wabiye in a statement made available to journalists today in Port Harcourt, Rivers State stressed that he has been hounded to say something concerning the recent drama surrounding the activities of the Presidential Amnesty Programme.

Excerpt of the statement:
So I've been hounded to say something concerning the recent drama surrounding the activities of the Presidential Amnesty Programme.


Yes, I was the Media Consultant there; but my contract ended two years ago. So I can't speak on their behalf anymore. But as an Ijaw son and a proud Kalabari man, I can stand and defend the truth! So some people will allow me rest too.


Some of you have heard rumours of the #4, 000,000 million canoe contracts. I will simply say the rumour is out there to mislead people and misrepresent the facts. I want to try and answer some unasked questions. To make this easy, I will list out some questions and answer them.


1. What is the N4M stated in the contract for?


Answer: The #4, 000, 000 million is the amount of money (Tax Inclusive) given to the CONSULTANT to EMPOWER each BENEFICIARY. Tax in Federal Consultancy Contracts is 5% Vat and 10% WHT. That’s 15% in total. So the actual sum per delegate is #3.4 million


2. What does the empowerment entail?

Answer: The empowerment is broken into bits. There is the Refresher Course, where the beneficiaries are given titbits about the trade and regular entrepreneurship lectures. This takes about one to two weeks. In this period the beneficiaries would be lodged in hotels and catered for.


After that comes the Land/Store Acquisition. Since the empowerment is expected to be permanent, you are given a space, to have as your base.


Then comes the actual empowerment which takes only a fraction of the awarded sum. The empowerment includes office setup with furnishing and stationery provided; Business Registration with CAC; and the starter pack, which the attached description doc will breakdown for you. The Fiber Fishing Boat is just an Item on that list.


After the empowerment there is a three months Mentorship period, which must be completed before final payments are made.


3. How much of the money is used to purchase the boat?


Answer: After enquiries I found out that 400, 000 thousand naira is the officially approved cost for that item. You can do your research and get your figures, but I think it is fair.


4. Has the contractor been paid?

Answer: No! I gathered that the policy in the office now allows payments for "job done" only. Meaning you must have completed the job to an extent before you will be paid for the part you have done.


Wabiye noted that he has answered four basic questions, adding that “he hope it helps.

“I take it as a responsibility to clarify issues like this. Especially when I understand the facts,” the former media aide declared.