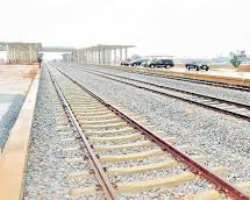 The Nigerian government under Muhammadu Buhari is creating an economically strategic railway corridor between Sahelo-Sahara region and Nigerian southern coast through the construction of the Kano – Maradi railway corridor between Nigeria and Niger republics.The project is widely seen as a major effort to open up Nigeria to new economic opportunities through the tapping of historical ties with most countrirs of the Sahel and the Sahara region.

The significance of the project lies in creating a viable trade corridor between borderline region of Nigeria to link the Sahelo Sahara region represented by Niger republic and the rest of Nigeria ,first from the Lagos -Kano line and second from Port Harcourt-Maiduguri-Kano line. The project slated to have 12 stations covers Dutse,Gaya,Wudil kano,Dambatta,kazaure,Daura,Shargale,Marshi,Katisna,Jibia and Maradi in Southern Niger republic.The historic trans-Sahara trade route that has Kano as a major trading point is being recreated through the new railway corridor.

The project is for the construction of a standard gauge railway line with an alignment of about 387 km from Kano to Maradi and a branch line from Kano to Dutse. The 284 km Kano-Maradi Railway Line will connect three federal states in northern Nigeria, namely Kano, Jigawa and Katsina, and the Republic of Niger (Maradi), while the 93 km branch line will connect the capital of Jigawa’s State (Dutse) to Kano . Consequently, the northern region of Nigeria and the Southern part of Niger will benefit from an important connection to the Nigerian railway network under construction and to Lagos and Lekki Port.

The company handling the USD1.88 billion project ,Mota-engil Africa had this week held a project mobilisation event in Switzerland,marketting the project to European companies,suppliers and sub-contractors with technical wherewithal.Reports indicated that the event was hugely successful with several companies across the value chains showing interest in the trans-national project.

The contractor,Mota-Engil is a company listed on the Euronext Lisbon, being part of the main stock index ( PSI 20). Founded in 1946, today the Group is a Multinational with operations focused on construction and infrastructure management in the segments of engineering and construction, waste management, transport Concessions, energy and mining.As a leader in Portugal with a a consolidated position in the Ranks of the 30th European Construction Groups, Mota-Engil is making its mark on three continents and in 28 countries.

The Nigerian government took the unsual step of engaging a European company as different from the Chinese companies which have dominated the Nigerian rail scene.The choice of Mota-Engil was however not a political decision. In October 2018,Mota-Engil Africa was listed as preferred bidder for the Project. After a due diligence mission conducted by a delegation composed by the Ministry of Finance (MoF), the Nigerian Railway Company (NRC) and the Infrastructure Concession Regulatory Commission (ICRC), the company’s expertise to execute the Project was confirmed and Mota-Engil was recommended for the Project to be taken by the Ministry of Transport (MoT) to the Federal Executive Council (FEC) for final approval.

The project has significant positive contributions to make to the growth and development of Nigeria and neighbouring countries.To start with,a standard guage rail link between landlocked Niger republic and Lagos ports opens the prospect of Niger routing her imports and exports through Nigerian ports.With Port Baro on River Niger, subsequent rail link to the Lagos -Kano line and a functioning dry port in Kaduna,the Sahel-Sahara nations may turn to Nigeria for import and export businesses. While southern Nigeria is the hub for West African busineses,northern Nigeria may soon become the busuness hub for Sahelo Sahara region.Both South and Northern Nigeria can then combined linked by SGR rail link to enhance the nation’s status as the bugest economy on the continent.

Contrary to earlier politicisation by activists,the project has the very huge potential to make positive socio-economic and environmental footprint.As already noted by experts,this railway project is a trade enabling infrastructure which will facilitate intra-regional trade and contribute to the creation of socio-economic development of the Northern Nigeria, a region with high population density and agricultural production. The project is structured following the highest environmental and social requirements in line with International Finance Corporation World Banks standards, OECD common approaches and Equator principles.

The projected new railway line will impact a population of approximately 8.8 million people with many positive social and economic effects, including encouraging economic development through ease of access to goods and services, facilitate transport of raw materials and manufactured goods, and creation of employment for a wide range of personnel. In addition, the rail line and its ancillary facilities will create conditions for the growth of existing businesses and industrial facilities, internal and external trades and country integration.

On financing infrastructure ,the project is arranged under a 14 years buyer credit and long-term commercial loans with the borrower and the guarantor as the Federal Ministry of Finance of Nigeria on behalf of the Federal Government of Nigeria.

As with all developmental projects,there are risks here and there.The overriding positive leverage are three fold namely the political will demonstrated and manifested by both Niger and Nigeria,the attested capacity of the contractor and the detailed financial,economic and environmental impact assessments already conducted.

In the spirit of big idea,some ambitious folks are already thinking of a Lagos – Kano high speed train in less than a decade time.Then Kano-Niger-Mediterranean High Speed train.Then ,you can have a fast ride from Lagos coast across Northern Nigeria ,up the Sahelo Sahara region to end in the meditteranean sea through Morroco/Libya/Algeria. And when you note that the King of Morroco and Spain are working to link Africa with Europe,you are then dreaming of a train ride from.Lagos to Europe.

Is it a dream? Not so really if the Chinese experience is anything to go by.

For now,breaking new ground is an interesting time in Nigerian infrastructure expansion history.

*This material was first published in Railway Business Magazine.The original article can be accessed here- https://railbus.com.ng/index.php/events/kano-maradi-railway-buharis-new-corridor-linking-sahelo-sahara-with-nigerian-coast/