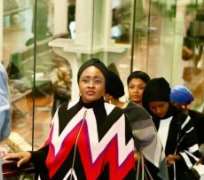 The Presidency on Saturday debunked reports ininuating internal wrangling the first family following the long absence of the first lady.

Daily Trust reported that Aisha Buhari, the wife of President Muhammadu Buhari, had been out of Nigeria for about two months now, raising concerns at the Presidential Villa.

The First Lady has not been sighted either in the Aso Presidential Villa or anywhere else in Nigeria for about two months, leading to reports that she had problems with her husband and decided to stay away.

But reacting to the reports, Director of Information to the First Lady, Mr Suleiman Haruna, told Sunday PUNCH: “It's a free world and people have been speculating about everything in this country and it is allowed.

“She is a free Nigerian and does not work for the government. So, if she decides to stay somewhere in her village for two months or to go somewhere and stay for two months, why should it become a national issue?

“She is a free Nigerian and has absolute freedom to move round for however long she wants.”

The paper asked Haruna to comment “on the speculation that Aisha was no longer comfortable with how the affairs of government were run and her alleged frequent brushes with some top administration officials, including the Chief of Staff to the President, Mr Abba Kyari, the director dismissed them as rumours.”

His reply: “I am in shock when I hear all these things. I don't believe in all these rumours about the President's wife because they are not true.

That is why, most times, the office does not bother to react to these speculations.”