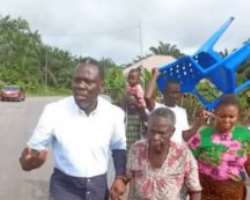 The mother of former Nigerian national football team coach Samson Siasia was released from captivity on Sunday ten weeks after she was abducted by gunmen, police and relatives said.

Beauty Ogere Siasia was seized from her home in southern Bayelsa state by two armed assailants in July in the latest kidnapping targeting a sports star in the West African country.

Regional police spokesman Asinim Butswat told AFP “she was released in the early hours” of Sunday, but gave no details on whether any payment had been handed over.

Relative Pinaowor Siasia confirmed the release and said the elderly woman would be taken to hospital for medical checks.

Kidnapping for ransom is common in Nigeria, especially in southern states, where wealthier residents and foreign oil workers have often been abducted.

Siasia was a national team player who went on to coach the Super Eagles for two stints in 2010 and 2016.

His mother was earlier taken in 2015 and held for 13 days before a ransom was exchanged.

Relatives of high-profile sports figures have been targeted repeatedly by gangs.

The father of then national team skipper John Mikel Obi was abducted last year in southeastern Enugu state before a ransom was paid for his release.

Siasia, who also served in the Nigerian Football Federation, was last month hit by a life ban by the sport’s world governing body FIFA after its ethics panel found him guilty of taking bribes in connection to match fixing.