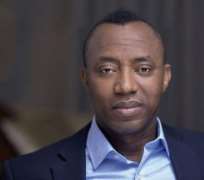 The Federal High Court in Abuja has threatened to jail the Director-General of the Department of State Security Service (DSS), Yusuf Bichi, over his continued detention of Mr Omoyele Sowore, SaharaReporters publisher. Recall that the court had through Justice Taiwo Taiwo ruled that the previous order issued for the security agency to detain Sowore for 45 days, had elapsed. Justice Taiwo noted that an application the DSS re-approached filed to renew the detention order was struck out after it was withdrawn.

He held that the application having been struck out, there was nothing before the court to warrant Sowore's continued stay in detention. The court stressed that it was constitutionally empowered to safeguard the right to liberty of every Nigerian citizen, irrespective of position or social status.

However, Justice Taiwo ordered Sowore to surrender his international passport to the Chief Registrar of the court. Open Letter to President Muhammadu Buhari (Opens in a new browser tab) Recall that Sowore was accused by the federal government of trying to oust President Muhammadu Buhari from office. He was on Thursday last week slammed seven-count charges on money laundering and conspiracy aimed at removing the President and Commander –in-Chief of the Armed Forces of the Federal Republic of Nigeria during his term of office

. “That you Omoyele Stephen Sowore, Male Adult of No 1 Mosafejo Street, Kiribo, Ese-Odo LGA, Ondo State, Olawale Adebayo Bakare {aka Mandate} Male, Adult of Olaiya Arca, Oshogbo LGA Osun State and others at large, under the aegis of Coalition for Revolution (CORE), sometimes in August 2019 in Abuja, Lagos and other parts of Nigeria within the jurisdiction of this honourable court, did conspired amongst yourselves to stage a revolution campaign on 5th day of August 2019 tagged #RevolutionNow” aimed at removing the President and Commander –in-Chief of the Armed Forces of the Federal Republic of Nigeria during his term of office otherwise known, than by constitutional means”, part of the charge read. Sowore was equally accused of insulting Buhari.

In the suit dated September 19 and filed at the federal high court in Abuja, the government accused Sowore of granting an interview which purpose caused insult on the person of the president of the country. Having ordered for his immediate release, DSS is yet to obey the order. In view of that therefore, the Federal High Court opined: The notice entitled, 'Notice of consequences of disobedience to order of court' read: