Abubakar Ali Remanded In Prison Custody
By The Nigeria Voice 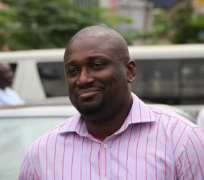 Peters is standing trial on a 27-count charge bordering on obtaining by false pretence, forgery and use of forged documents to the tune of N978, 401, 732, 09(Nine Hundred and Seventy-eight Million, Four Hundred and One Thousand, Seven Hundred and Thirty-two Naira, Nine Kobo (N978, 401, 732, 09) brought against him by the Economic and Financial Crimes Commission, EFCC.

The defendant allegedly defrauded the Federal Government of the said sum of money by supplying 6, 505,140. 04 litres of Petroleum Motor Spirit, PMS, instead of 19,488, 992 litres, being the quantity he was contracted to supply.

The defendant also allegedly forged the documents that were used to procure the product in order to conceal the exact amount he paid for it and receive in excess money for the product supplied.

At the resumed sitting today, the defence counsel, Emefo Etudo, sought to withdraw from the case on the grounds that his client was planning to jeopardize the case and abscond from the country.

Etudo, in a sworn affidavit, also told the court he urged his client to pay back the money upon realizing that he had defrauded the Federal Government.

“My Lord, he agreed to pay the money and subsequently made some payments.

“He, however, stopped at some point.
“He also informed me of his plans to abscond from the country without paying back in full the money he obtained under false pretence,” Etudo stated.

The defence counsel, in his further submission, told the court that his client was planning to frustrate a similar case after receiving money from parties involved.

“ My Lord, my client forged his signature on the Corporate Affairs Commission, CAC, documents and gave damaging false information about me and other lawyers involved in the case.

“He is involved in three oil subsidy cases, although the EFCC is only aware of two of them.

“The total money belonging to the Federal Government of Nigeria, which was siphoned abroad, is about N2billion,” he further told the court.

The defence counsel, therefore, urged the court to permit him to withdraw from the case, saying “the defendant is a threat to national security and will abscond if he continues on the bail he was granted by the court.”

The Judge also vacated all the undertakings made on behalf of the defendant by the counsel’s law firm since he could no longer assure the court that he is in a position to produce the defendant at his trial.

Consequently, Justice Balogun remanded the defendant in prison custody and adjourned the case to October 15, 2019 for continuation of hearing.