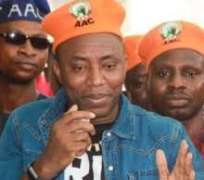 I have watched with bated breath and keen interest, the reactions to the unlawful arrest and unjust incarceration of Omoyele Sowore, from the different quarters of our political schisms, following his declaration to lead a mass action against the present Nigerian government.

The most interesting to me so far, I must say, appears to be the snivelling of some Peoples Democratic Party's (PDP) Apologists. For it would seem, that they are more concerned about the past action(s) of Sowore than they are about his present predicament; although I must add, that they seem entrapped in an involved web of cognitive dissonance.

On the one hand, they give the impression that they are truly upset by the unjust persecution of Sowore by the Nigerian government. But on the other hand, they unabashedly make a case for why he is most deserving of such persecution. According to them, Sowore supported Buhari ferociously in 2015 — behind closed doors and openly — and as a result, is deserving of the injustice being meted to him presently.

To these people, Sowore’s predicament is half-good and half-bad. They can only view his predicament from their jaundiced prisms of party fealty. They conveniently hide behind the axiom that man must learn to live with the consequences of his actions, to propagate their nearly full-blown sophistry.

What was previously a latent but seething fit of pique among a few, has now evolved to an unchecked blitzkrieg on Sowore’s moral trestle. Now, it would seem as though a section of the social media has been energized solely for this purpose. I have even seen videos of an obviously excited Sowore, purportedly celebrating Buhari’s victory in 2015.

The danger in this unchecked blitzkrieg is that it not only enables injustice, but it also aims to sully the reputation of Sowore and mire him in the same swamp of atrophied morality as the morally bankrupt politicians in the APC and PDP. But this is wrong. And it does no good for neither our politics nor society.

I must be very clear on this: the fact that a person exerts his inherent right as a human and citizen in a democratic society, to exercise his franchise and perhaps solicit political support for a person he believes is deserving of it, does not negate his responsibility to equally demand accountability from such a person whensoever he deems fit.

As PDP apologists would have us believe, albeit erroneously; the role Sowore played in the emergence of Buhari in 2015 was too conspicuous and vehement, such that it essentially deprives him the right to now demand accountability from Buhari, even though Sowore was never flattering in censuring Buhari’s governance style and policies throughout his first-term, nor has he been a supporter of Buhari’s present second-term.

What this defective manner of thinking does to the psyche of an unsuspecting onlooker is unimaginably bad. It projects the impression that one must actively defend an indefensible thing, simply because one participated in the mainstreaming of such a thing, even if such a thing loses its essence or legitimacy.

You may criticize a man for his negligence, but you shouldn’t demonize him for being consistent in his quest for good governance. Democracy affords one the opportunity to be labile; whether for good or bad. If Sowore supported Buhari in 2015, it was because he believed the PDP failed to deliver on its mandate, and rightfully so. And if Sowore is now criticizing Buhari’s government, he should rather be lauded for it. The ability to remain firm and true to the right principles and convictions, regardless of whose ox is gored, has sadly become a rarity in our present society.

To be clear, the persecution of Sowore is plainly an act of injustice. It is unjust and must be called as such. There are no ifs and buts. Justice is a fundamentally crucial ingredient to the sustainability of any human society. If justice is breached even a bit, it must be condemned in its totality, and not glossed with some ludicrous sentiments by party apologists.

I must also observe, while I conclude, that it would seem as though many of those that condemn injustice in our society today, do so not because they fundamentally believe justice to be a linchpin for maintaining peace and order in any given society, but because they worry that the pendulum of injustice might come for them tomorrow, and so they speak out to merely earn some sympathy capital for the future. Be that as it may, it would be unwise for anyone to wobble on a crucial democratic element as justice — common sense demands it, democracy demands it, and humanity certainly demands it.

Adebayo Raphael is a Human Rights Activist based in Abuja. Twitter: @Asorosobioro.