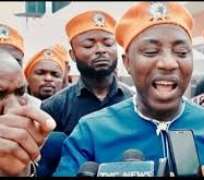 The African Action Congress, AAC, has urged its followers to storm the Federal High Court, Abuja, in support of its 2019 presidential candidate, Omoyele Sowore.

Sowore had called for a revolution over the alleged failure of the current Federal Government.

Following the call for revolution, the Department of State Services, DSS, had arrested the AAC 2019 presidential candidate.

Despite Sowore’s arrest, the protest was held in pockets of locations.

Sowore, who is the Publisher of Saharareporters, will appear in court on Tuesday to face a seven-count charge levelled against him by the Nigerian government.

However, AAC National Organising Secretary, Comrade Oshioks explained that the call for members and supporters to storm the court would send a strong message to the government for infringing on Sowore’s right.

In a statement he signed and sent to all AAC members, Oshioks said, “We are all expected to be at the Federal High Court, Maitama, Abuja, on days our national leader, Sowore, will be brought for his court hearing.

“The solidarity from us will send the right message to those who have trampled on his fundamental human rights for the past 52 days and counting.

“It will let the Nigerian Government know that the people know Sowore as a man different from the allegations cooked up against him.

“Comrades, we are all encouraged to kindly attend these proceedings in solidarity. We should be in court as early as 8:00am daily.”