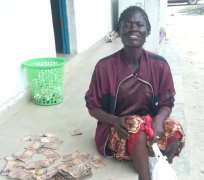 Another side of the Nigerian Police was recently witnessed at Ekpan Divisional Headquarters in Uwvie Local Government Area of Delta State when the sum of N200, 000 recovered from a mentally challenged woman was handed over to her family.

Narrating the story to our correspondent, the elder brother of the woman, Mr. Tony Micah disclosed that his sister Miss Regina Micah who has been in that condition for over twenty years, normally engages herself in petty business at their village market.

He said though they are aware that she is having some money, but they never knew it was that huge.

Mr. Tony who hails from Kiagbodo in Burutu local government area of Delta State disclosed that for sometime now they have been looking for their sister until they got a call from the Police that she was in their custody.

He used the opportunity to express appreciation to the Divisional Police Officer of the station SP Ibok Asanaenyi for this wonderful gesture saying that this has painted another picture of the Nigerian Police from the one he used to know. “I used to think that Police are evil but by this encounter with them today now, am having a total different mindset” he added. However a source who spoke on the condition of anonymity hinted that the Police got a tip off that a mad woman was having a huge amount of money somewhere in the area and some boys are planning to take it from her.

The DPO quickly mobilized his men, led by the pragmatic DCO, DSP Lawrence Ogoke to the place and the woman was quickly taken to their custody. Through a very thorough and rigorous investigation they were able to locate the relatives of the woman at Kiagbodo in Burutu Local Government Area of Delta State.

Our source also revealed that the DPO has strictly instructed that the money should be deposited into an account for the woman by the family for her upkeep and promised to always monitor it to make sure it is judiciously and prudently being spent.

This, the family have all agreed to execute without any reservations.