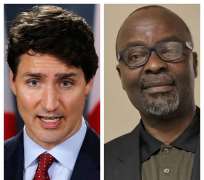 As Canadians prepare for the House of Commons election, incumbent Prime Minister, Justin Trudeau, has solicited the help of a Nigerian journalist, Chief Olufemi Shodunke, to re-elect him for another four years.

“This is an important election – and we need your support to earn another mandate,” Trudeau, whose late father, Pierre Trudeau, remains Canada’s third longest-serving PM, pleaded with Canada-based Publisher of GatewayMail newspaper and one-time Guest Writer for New Voices, a news magazine of the Mennonite New Life Centre, Toronto.

He further begged: “This is it, Olufemi. The campaign begins now and we need you with us. Please give today to help us run a strong campaign, protect our progress, and earn another mandate from Canadians on October 21st.”

Apparently seeing his invaluable community leadership as a boost to the reelection campaign, the PM’s ruling Liberal Party (LP) also urged Shodunke, ex-Deputy Editor of the defunct Nigerian Compass on Sunday newspaper, to assist the party win another term.

Shodunke, an indigene of Abeokuta from Ogun State, is the immediate past President of Olumo Progressive Association Canada Inc, and currently the Public Relations Officer of Egba National Association USA and Canada.

The Best Reporter of the Year 2003 in Ogun State also is an elected Member, Board of Director (BOD) of African Canadian Social Development Council and was recently appointed Member, BOD of non-for-profit Life of Hope Foundation Canada.

Similarly, the Egba community chief was a one-time honorary Vice-President, Yoruba Community Association (YCA) Canada, and the first Public Relations Officer of Oodua Progressive Union (OPU) Canada Chapter. He had served in Nigeria as Chairman, Correspondents Chapel and Chairman, Nigerian CompassChapel in the Ogun State Council of the Nigeria Union of Journalists (NUJ) before migrating to Toronto, Canada in 2010.

Shodunke is well known within the large African-Canadians community, particularly among Nigerian ethnic and cultural associations in Ontario and Alberta provinces.

“Dear Olufemi, this is the moment we’ve been working towards – and all of our progress is at stake,” Trudeau, who also sought financial donation to his campaign, said in a letter personally signed and addressed to Shodunke, who holds two masters’ degree from the University of Ibadan and Ryerson University, Toronto.

“With four years of real progress to protect and build on, this campaign is going to be much different than it was in 2015,” the 23rd PM said, adding: “This time, we’ve got over three years of incredible progress to defend. There will be a clear choice to make: going backward with cuts and austerity from the Conservatives, or moving forward with our plan to invest in Canadians.”

Trudeau, who is also the leader of LP, said of his party: “While Liberals have been taking real action to strengthen the middle class, protect a clean environment, and grow the economy, Conservatives want to roll back our progress.”

He declared: “We cannot allow that to happen, Olufemi. It’s time to show Mr. Scheer and his Conservative allies that Canadians don’t want to go backwards. That making progress matters – and a better future for Canada isn’t possible with fear and division standing in the way.

Also, Trudeau in an email told Shodunke: “The 2019 election campaign starts today, Olufemi – and I’m so grateful to count you as a part of this movement.

“We’ve got an important choice to make on October 21st, and all of our work between now and then is about the kind of future we want to build together.”

“Do we go back to the politics of the Harper years, or keep moving forward and build on the progress we’ve made together? Trudeau asked, and answered: “I’m for moving forward, for everyone – and I’m counting on your hope and hard work as we start out on this new campaign.”

The PM boasted on his achievements: “Since 2015, Canadians have created more than one million new jobs, unemployment has fallen to a 40-year low, and more than 825,000 Canadians have lifted themselves out of poverty.

“We’ve made real progress to invest in our middle class, to grow an economy that works for everyone, and to protect a clean environment for future generations – and together, there’s so much more to do.”

“We know what we’re up against, and we know what’s at stake. The Conservatives like to say they’re for the people, but then they cut taxes for the wealthy and cut services for everyone else,” Trudeau lamented.

“Instead, we can choose to move forward with our work to build a better future for all Canadians – but I need your help to make it possible,” the PM, who is facing backlash over his past seemingly racial actions from the opposition, said.

The ruling Liberal, which came to power after defeating the Conservatives in 2015, however, urged Shodunke, ex-Deputy Editor of Nigerian Compass on Sunday, to volunteer for the party to win another term.

“Something’s been on my mind as we start this campaign, Olufemi. I’ve been thinking about what Choose Forward means not only to me, but also for my family, and my community,” Cowan said.

“Like so many Canadians, I want to be sure that my kids grow up in a country that helps people build a better life for themselves and their loved ones,” the President said, adding: “Choosing Forward means investing in people, like with a Canada Child Benefit that puts more money in families’ pockets to help with everyday expenses.”

Cowan further said: “It means conserving nature and protecting a clean environment, including by putting a price on pollution and banning harmful single use plastics by 2021.

“And it has meant hard work to grow an economy that works for everyone, like by standing up for Canadians at the negotiating table and securing trade access to our largest and most important trading partner at a time of US protectionism.”

“Since we officially began our campaign this week, thousands of Canadians have already stepped up and made a contribution – and it makes an even bigger impact in these early days of the campaign. Can we count on you to Choose Forward, Olufemi? Cowan asked Shodunke, who is the Baaroyin of Igbeinland, and Agboland.

Topp, however, said: “You’re key to this campaign, Olufemi. I just walked out of a campaign fundraising meeting – and without you, hitting our $500,000 mid-month online fundraising goal will be tough.

“Your support early in this campaign will help us keep moving forward with the real progress we’re making for Canadians – all of which is at stake on October 21 – just 38 days away.”

“Canadians are counting on us to fight for what matters and continue with our plan to invest in the middle class,” the Senior Director, Fundraising said, adding: “That’s why reaching our $500,000 online goal is so important, especially when there’s still a chance to shape important campaign plans and decisions – and with your help, I know we can do it.”

“Chip in now to support the 2019 Re-election Fund and help Justin Trudeau and the Liberal team earn another mandate in this important election,” she pleaded.

“Hey, Olufemi. It’s game time. This is a big weekend. And right now, we have thousands of volunteers knocking on doors across the country for our first national Weekend of Action during the campaign,” the party said.

“There are a lot of people to connect with – and our volunteers have a big job ahead of them. That’s where you come in,” the LP’s National Campaign Field Director, Matt Stickney, told Shodunke, one-time Guest Writer for New Voices, a news magazine of the Mennonite New Life Centre, Toronto, in an email message.

However, in his response, Shodunke said: “Indeed, it’s a great honour and rare privilege for me to receive personal messages from our PM and the ruling Liberal Party to join campaign efforts to re-elect Mr. Trudeau.”

“No doubt, I will strive to do everything within my power to assist in this regard, though the election is going to be really tight, particularly with the series of ongoing campaigns by the opposition Conservative Party against the PM,” the journalist stressed.