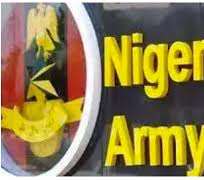 Following military's unrelenting onslaught on the BHT/ISWAP hideouts along the Lake Chad region and Northern Borno, credible information reaching the Headquarters of Theatre Command, OPERATION LAFIYA DOLE (OPLD) indicates that some of the surviving criminals are seeking refuge in the homes of some unscrupulous individuals in some parts of Borno and Yobe States.

He said: "While we are making concerted efforts to trace and fish out the fleeing criminals, it is important to inform and warn all those harbouring the fleeing fugitives to report or hand them to the troops of OPERATION LAFIYA DOLE immediately. Failure to do that would attract severe consequences."

The Acting DAPR added that the Theatre Command Operation LAFIYA DOLE enjoined all well meaning Nigerians, especially those residing in aforementioned areas, to report any suspicious and strange faces in their communities.

He also encouraged the public to report such suspicious persons through Nigeria Army report platform on www.army.mil.ng or Nigerian Military toll free short code 193 (using any network), or any of the following special phone numbers dedicated for reporting Boko Haram Terrorist/ISWAP activities: +2347017222225,