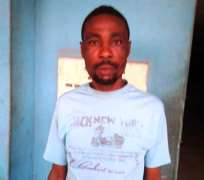 The Nigerian Voice learnt that the arrest of the suspect followed a complaint to police at Agbado police station by the father of the girl, Ikechukwu Orji that Oluwole who is his co-tenant defiled his daughter.

Ikechukwu told police that his daughter informed her mother how Oluwole lured her to his apartment when her mom went out.

The Police Public Relations Officer for Ogun State Police Command, DSP Abimbola Oyeyemi told The Nigerian Voice that the suspect confessed that he committed the crime.

According to the PPRO, "the suspect who initially denied committing the crime confessed eventually after the victim was taken to the General Hospital for medical examination and the medical report confirmed that the girl has been defiled.

The Commissioner of Police, CP Bashir Makama ordered the immediate transfer of the suspect to Anti-Human Trafficking and Child Labour Unit of the State Criminal Investigation and Intelligence Department for proper investigation and prosecution.