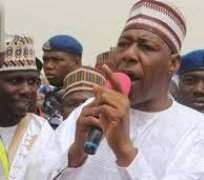 Concerned about the welfare of citizens displaced by boko haram insurgents' attacks, Borno State Governor, Professor Babagana Umara Zulum was in the Republic of Cameroon on Tuesday and Wednesday, where he met more than 60,000 refugees who fled different parts of Borno at the wake of different attacks by the violent boko haram terror group.

The visit focused on supporting the refugees and their eventual return and rebuild of their communities.

The United Nations High Commission for Refugees, UNHCR which manages the Minawao camp visited by the Governor, had in May this year put at 86,000, the number of Borno citizens taking refuge in Cameroon. Officials however told Zulum during his visit, that voluntary returns by refugees have depleted the figures.

Minawao is about 95 kilometres away from Marwa, capital of Cameroon's far north ‎region.

Governor Zulum flew from Maiduguri to the international airport in Marwa on Tuesday afternoon. He was received by Governor of Mijinyawa Bakare of Cameroon's far North alongside top officials of the host government.

Addressing a sea of anxious but happy refugees, the Borno Governor consoled them and announced plans for immediate commencement of resettlement houses in Banki, Bama town, pulka,Gwoza and Darajamal within the next two months for the purpose of resettling refugees yearning for return.

Zulum expressed gratitude to the Cameroonian government and citizens of host communities for their empathy towards Nigerians from Borno State who took refuge since 2013 and 2014 when insurgents took sovereign control of about 20 local government areas in the State.

The Governor was expected ‎to travel to some border communities in Borno State through Cameroon, to meet more persons displayed by the insurgency.

Zulum traveled to Cameroon in the company of the chairperson, Borno State Emergency Management Agency, SEMA, an assembly member and two commissioners.