AHRC Commemorates the 37th Anniversary of the Sabra and Shalita Massacre in Lebanon: 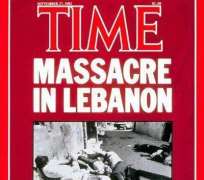 The American Human Rights Council (AHRC-USA) joins the world's human rights community and the Palestinian people everywhere in commemorating one of the most horrific crimes against humanity.

The Sabra and Shatila massacre was perpetrated on September 16, 17 and 18 of September 1982 by Christian Lebanese right- wing militias allied with Israel and under the control of the Israeli occupation army. The massacre occurred despite the fact that the PLO did not leave Lebanon after the Israeli invasion and siege until the late PLO leader Yasser Arafat asked for and received US government written assurances that the Palestinian civilians would not be harmed. These assurances were not honored.

The massacre claimed approximately over 3500 people, mostly Palestinians, with a number of poor Lebanese Muslims who live in the camps with them. There is no precise count of the death toll since the militias buried many in mass graves and took some away.

There massacre was met with international outrage. The images shocked the conscience of the world. The United Nations' Security Council condemned the massacre with Resolution 521 (19 September 1982). This condemnation was followed by a 16 December 1982 General Assembly resolution qualifying the massacre as an "act of genocide."

The massacre was not the first massacre that the Palestinians of Lebanon experienced. Before that, Christian right wing militias, also allied with Israel, shelled and starved the Palestinian camp of Tal el Zaater. When it fell, atrocities were committed. Many of the Camp Tal Zaater Palestinians remain unaccounted for until today.

"The Palestinian refugees of Lebanon have suffered so much and continue to suffer the state violence of discrimination and marginalization, being denied basic rights," said Imad Hamad, AHRC Executive Director. "As to the massacres, justice is not served until all the missing are accounted for and all the perpetrators are brought to justice," added Hamad. "The crimes were crimes against humanity," concluded Hamad.