One Dies, Others Injure In Collapsed Building In Delta University 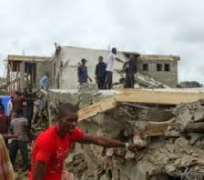 One person has died from a collapsed building under construction at the Delta State University (DELSU), Anwai campus while three others sustained injuries.

The deceased who was a construction worker at site died following a concrete slap that carved in at a lecture hall under construction.

Trouble started when one of the workers was said to have stepped on a concrete slab that had not dried leading to the collapse of the section on the unidentified deceased worker who was scooping sand beneath.

He died immediately as a result of the impact of the concrete slab on him.

Following the collapse, students, lecturers and other varsity workers were said have scampered for safety, a development that temporarily halted academic activities.

The students of the university were said to be mobilising for a spontaneous protest when they discovered that it was a building collapse, but were promptly dissuaded by a concerted effort of anti riot policemen drafted to the campus to maintain law and order.

Commissioner for Higher Education, Professor Patrick Muoboghare who visited the scene, lamented the death of the worker and the injured.

According to the commissioner, the family of the deceased victim has been contacted while the injured ones have been rushed to the hospital.

Muoboghare explained that the "workers were setting up a concrete slab. It was not dried before one worker mistakenly stepped on it while carrying a load.

"You know when you are setting blocks, it must be allowed to age and the concrete must be dried. This has nothing to do with the integrity of the building, as the building is intact."