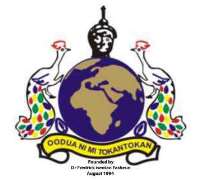 The long awaited inauguration of the National Executive Council of Oodua Peoples Congress (OPC) has finally taken place today, 12th September 2019, at the Organization's headquarters in Okota, Lagos.The delay was necessitated as a result of the passage to Glory of the Founder of the organization, Dr. Frederick Fasehun on December 1st 2018 and subscequent mourning by all members. Below is the inaugural speech of the President, Aare Prince Osibote.

The election and subsequent inauguration of the National Executive Officers of the Oodua Peoples Congress (OPC) marks a watershed in the annals of the great platform for the Yoruba nationality in Nigeria and in the Diaspora. It denotes a new chapter in the copious and rich past of a race with famed nobility, service and wisdom.

Accordingly, this inauguration comes with a very huge responsibility on the shoulders of all of us; an obligation to exhibit the minimum standard of behavior and conduct of the typical Yoruba in all circumstances and places.

As a people known for patriotism, discipline, bravery and honesty, it behooves on each and every one of us to lead by example, as well as showcase the zeal of enterprise and hard work that complement the virtuous character of the Yoruba.

Because we are an ethnic nationality with an immense sense of history, other ethnic groups, nationalities and race look on to the Yoruba for pace-setting and progressive agenda. So, we have been handed over the banner of sustaining the spirit behind the others acknowledging the Yoruba as the Number One in progressive ideas and ideals. Note that the OPC was established based on that vision. We owe the human race the onerous duty of protecting and upholding strongly that vision.

Inasmuch as I want to appreciate and congratulate all of us for having the rare privilege to lead the Yoruba as pathfinders now, you must realize that there are thousands of others, who are eminently qualified, competent and pious that serve in similar capacities. You are torchbearers. You must show the way.

You must see yourselves as having the privilege and honour to be counted and selected to lead at this period in the chequered history of the OPC. You must carve a niche for yourself individually and collectively as having served diligently, conscientiously and faithfully our great people of Yoruba land when you were given the rare opportunity.

I implore you to display integrity; be men and women of honour. We should not be carried away by the spur of the moment. We should not deviate or allowed to be distracted by scoundrels from the vision of the founding father of the OPC, Dr Fredrick Fasehun. Let me leavce you with the mantra of the OPC as encapsulated as follows: The OPC is Egbe Omo ilu’ egbe omoluwabi; iran Yoruba ki toro bara; Egbe yio ni baje. Remember, all of us now bear the Cross; the Cross to preserve the heritage of the Yoruba ethnic nationality.