Why We Refused To Field Witnesses Against Nsima Ekere- Inec

...AS TRIBUNAL ADOPTS BRIEFS, ADJOURNS FOR RULING
By Essien Ndueso 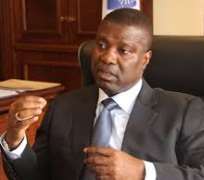 The Independent National Electoral Commission, INEC has described the petition filed by the candidate of the All Progressives Congress, APC, Mr. Nsima Ekere against the election of Governor Udom Emmanuel of the PDP as full of irreconcilable contradictions.

The commission speaking with newsmen through its Counsel, Sylva Ogwemoh(SAN) said, "there was nothing for us to counter, because there is no case. We have made it clear that there are a lot of irreconcilable contradictions and inconsistent irregularities in the case.

"We have asked the court to dismiss the case. Our position is that they have come to court with nothing, and so they would get nothing from the court".

The INEC Counsel maintained that since the burden of proof rests on the petitioner to substantiate his claim with evidence, what the commission had expected Ekere to do, was to tender evidence to back his claim, but rather the petitioner contradicted himself at the tribunal.

The electoral umpire therefore expressed optimism that the Governorship Election Petitions Tribunal sitting in Uyo would throw out the petition for lacking in merit.

"The petitioner has failed to prove beyond reasonable doubt why the election conducted by the electoral body, INEC in the state should be nullified.

"When a party comes with an allegation, standards set by the law must be met. The petitioner in this case has not met those standards. They alleged that accreditation was not done, and they failed to prove. Next he made allegation about card reader without any attempt to contradict the use of the card reader in the election.

Also speaking with newsmen, Counsel to PDP, Tayo Oyetibo said the party was satisfied with proceedings so far at the tribunal.

He maintained that the petition filed by the APC candidate should be dismissed.

Counsel to the petitioner, J.S. Okutepa also spoke of his belief that justice would be upheld by the three man panel.

Earlier at during the adoption of final addresses by parties, the Peoples Democratic Party (PDP) had described the petition of the defeated APC Governorship Candidate, Nsima Ekere, as vague.

Urging the Tribunal to dismiss the petition, Counsel to the PDP, Tayo Oyetibo SAN, cited Buhari vs INEC, and submitted that the Supreme Court had stated the meaning of substantial non-compliance, which Ekere and the APC have not defined in their Petition.

Arguing on other related authorities, Oyetibo stressed that “the order of the law is to dismiss this petition”.

Counsel to first Respondent, Dr.. Onyechi Ikpeazu SAN, prayed that the Petition and all objections of the Petitioners should be dismissed.

“My Lords, the First Respondent would rely on the case of PDP & Anor v INEC delivered on May 24, 2019. We urge your lordships to dismiss this petition and reject all objections of the Petitioners to documents for reasons we have stated in our Final Written Address” Ikpeazu said

The Petitioners through J. S. Okutepa SAN, in their final submissions, urged the court to cancel the elections as it was conducted in a manner not in tandem with the provisions of the Electoral Act for the conduct of elections in Nigeria.

J. S. Okutekpa said the Tribunal should allow their Petition and nullify the elections for a rerun.

He also said all documents tendered by Respondents should be discountenanced because Respondents did not comply with rules of admissibility.

Ikpeazu, who later spoke on behalf of the counsel on both sides, appreciated the three-man panel for handling the case in a highly professional manner.

He added that Counsel have learnt a lot from the Tribunal in the course of the case.

Ikpeazu assured the Tribunal that Counsel have great respect for each other as friends outside the Tribunal, despite being on different sides in Court.

The Tribunal Chairman, Justice A. M. Yakubu thanked Counsel for the cooperation with the Tribunal.

“We have also learnt a lot and have seen good characters from Counsel. It is not a surprise because of the capacity of Counsel involved. I thank you all for conducting yourselves and I pray to God to give us the eyes and to come to Justice in this case” Justice Yakubu said.

The Tribunal adjourned for ruling on a later unannounced date.