Uchenna Inya: Recreating Lives And Destinies With The Pen 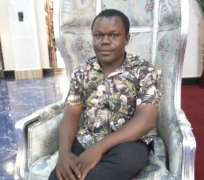 The saying that "The pen is mightier than sword" had sounded like a casual aphorism from distant lands for years until the flourishing and interesting career of Uchenna Inya - a young but courageous journalist whose pen writes without fear or favour - debuted on Ebonyi media space. Uchenna Inya is the Chief Correspondent of New Telegraph newspapers in Ebonyi State.

Born in Afikpo North Local Government Area of Ebonyi State on 24th March, 1981, Uche as he is fondly called, holds a Bachelor's degree in Mass Communication from Ebonyi State University, Abakaliki. After his National Youth Service Corps in 2008, he went into practical journalism on the stable of a standard local tabloid, Citizens' Advocate newspapers. Uchenna Inya, a diligent and committed professional, took Ebonyi media constituency by storm and, within a little time, became a household name, enjoying popularity comparable only to that of upwardly mobile sports icons. This was enviable for a young journalist in the print-media in a rural state like Ebonyi. Uche is a mixture of diplomacy, courage and determination; and this has continued to endear him to the people. A professional to the core; Uche could chase news to any distance and once he gets the facts, he sieves it through the ethics of the profession and publishes same without fear or favour. This way, Uche built a large club of dedicated readership which pervades every stratum of the society. Members of this club of readership diligently follow his reports and serve as performance-enhancement fillip to his career. In 2014, Uchenna Inya became the correspondent of NewTelegraph newspapers in Ebonyi State. It was here that his humongous passion for the propagation of truth for the benefit of mankind in general came to full blossom. Uchenna Inya through his numerous features began to expose social ills; man's inhumanity to his fellow man; seek help or interventions for those passing through the dark alleys of life and to extol outstanding demonstrations of goodwill or commitments to the common good. When a particular church premisses was turned into venue for indecent activities in the nights, Uche refused to look the other way. He attacked the odious development in a piece he entitled "Church in the day, brothel at night"; and it stopped. With titles like "Two Women, Parents Arrested For Mutilating 11 Girls" and "Rescued from FGM, Severe Bleeding And Violence", Uche contributed his quota to the fight against Female Genital Mutilation. Mothers of triplets and other multiple births and the sick who were detained in hospitals for inability to pay hospital bills have benefited immensely from Uchenna Inya's media activism. Through features like "Multiple Births, Multiple Burden"; "Housewife Laments Husband's Disapperance After She Gave Birth To Triplets"; "Displaced With Triplets, In Need"; and more, Uchenna Inya successfully attracted help from well-to-do members of the society to the poor and the needy. He has equally brought financial reliefs and destiny-helpers to students whose carreers or destinies were threatened by lack of funds through his writings. The focus of of Uchenna Inya's attention is not limited to societal ills and the gory tales of the plights of the poor and the needy. He covers the entire gamut of activities in the society and promotes acts of patriotism, goodwill and other virtues. When a lawmaker held hospital-amnesty and empowerment programme in favour of former hospital patients who were detained in the hospitals for their inability to pay hospital bills, Inya celebrated the lawmaker and the beneficiaries in his essay entitled "Lawmaker Empowers Mother of Triplets Turned Begger". When his essay on the plight of a displaced mother of triplets stirred the heart of the compassionate Governor of Ebonyi State, Engr. David Umahi, into providing a comprehensive welfare package which included decent accommodation, medicare, financial life-line, et cetera for the woman, Inya celebrated Governor Umahi, the lucky mother of triplets his pen and his media platform in another piece entitled "NewTelegraph Report: Umahi Gives Homeless Triplets' Mother Lifeline". Because of the unflinching balance which Uchenna Inya has maintained in the practice of his profession as a journalist, he has been totally excluded from the club of brown-envelope journalists; just as he seems to have equally overgrown man-made hazards like intimidations and attacks from people who are averse to truth because they know that Uche has no qualms being the next martyr of truth and justice. For all these and more, Mr. Uchenna Inya was voted Ebonyi Best Reporter of The Year in an online poll conducted by the office of the Technical Assistant to the Governor of Ebonyi State on Social Media in conjunction with Green Blaze Magazines in 2017.

Uchenna Inya, a Christian father and husband of one wife, is happily and peacefully married to the love of his life - Nnenna, and the union is blessed with promising children. Certainly, this silent achiever who has effectively used his pen to recreate lives, destinies and his society is unassailably one of the shining stars that decorate the journalism profession in Nigeria; and he is bound to be sung in high decibels someday.