Xenophobia and Ethnophobia: Matters Arising and Issues of Discourse 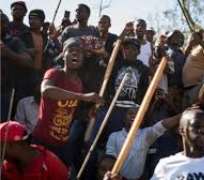 Africa as a continent needs to begin to look at issues with the voice of reason rather than emotions and I think this is were the need for Philosophy and Philosophers and even Theologians begin to get involve practically as they influence the academic arena and begin to contribute more to the development of the African continent. The fact remains that Africa will never surrender to the manner in which we have refuse to tell ourselves the truth as to what we are as Africans and who we are as Africans.

We no longer want to hear and listen to the music of great African legends like Sunny Okosun, Fela Anikulapo Kuti and others who have made impact in the music industries about the way forward for Africa. As Africans, we are stocked and stalked in a confused devastating psychological misfortune as to what is of value and what is ephemeral and now we are at the verge of destroying the foundations of Julius Nyerere, Obafemi Awolowo, and others who took their time to make Africa and the Nigerian State to be a place for all.

In Africa it is genocide today, and tomorrow it is xenophobia and next tomorrow it is Ethnophobia. Yet, we discuss these issues as if we are all clean of this problems that confronts us everyday. Unfortunately, the South Africans are only carrying out what others do indiscriminately in their various states that culminates in the destruction of lives and properties. South Africans have only displayed the peculiarities of what most Africans are and not necessarily in terms of xenophobic attacks but that as Africans we have no value for human life. The value for Human life is not a South African problem but an African problem. No doubt, the value of and the sacredness for human life in as much it is a global concern, the red alert places of interest is Africa. We are even yet to recover from the genocide and it’s ripple effect with the global devastating consequences it had on the psychic of the world; we are yet to recover from the Killings and kidnappings and even bombings in Nigeria; we are yet to even recover from the Lybian revolution that ousted Mamman Ghardafi that kept that nation in the pool of blood which has brought a Nation in the process of recovery but yet in a state of despondency. Even in Nigeria as it is, the drums of another civil war is beating hard and everyone in Nigeria is living in morbid fear and exaggerated anxiety.

We have to keep reminding ourselves of the value for Human life because no diplomatic relations or International policy can best work better than us going back to the fundamentals of human existence and the value of human life as a sacred entity that no one has the right to tamper with. I remember the words of Diogenes a philosopher who was asked to which citizenship do you belong to? He replied saying “I am the citizen of the world”. Are we truly African citizens or we just pretend to be Africans on the basis of Western intimidation and political disposition rather than an integral realistic approach that is a valuable pragmatic insights as to our being as human beings. We were in this Country call Nigeria we asked our African brothers Ghanaians to live Nigeria, when we knew that the Ghanaians whether we like it or not contributed to the educational development of this Country. I guess we all remembers the “The Ghana Must Go” when we chased them away from our Country without recourse to this Africanness for global recognition. Today, Nigerians are struggling to go to Ghana for survival. Now South Africans want us to live their Country and because we have refused to live they now think the best way out is to kill Nigerians so they can be threatened to live thier land in which they themselves are not even sure of their own status as Black Africans. A people already psychologically misplaced of course will act they way they are acting because of fear not to loose their ancestral home.

We are in a continent were a place like Nigeria is a carreer of the worst form of Ethnophobia. We are blaming South Africans but we will not blame ourselves for not respecting a Nigerian for what they represent. We are in a country were in institutions of Federal nature a particular tribe or ethnic group gives employment on the basis of tribe and when the head of affairs of such Federal institutions does not come from a particular ethnic or tribe, then those from that ethnic majority begin to look for ways and strategy to frustrate the incumbent. A friend of mind told me how he went to look for a job in one of the parts of Nigeria and when he met the school top administrators’ of the institution were he applied for the job and upon meeting the him, the first question was “where did you come from?” and the young man responded “I am a Nigerian living in Kachia” and the man went further to ask “I mean your state of origin” and the young man said “he is from Ogun State” and from there the narrative changed and was asked to keep trying. This is indeed the root of the African problem that is reflected in South Africa and which has led to Killings of innocent Nigerians and this indeed is an African problem.

There is a need to change the narratives if we must see Africa as a home rather than a residence. Not every place of residence is a home. Nigerians must see themselves as Nigerians so we can resolve the issues of citizenship and indigeneship. We must confront the issues rather than pretending as if they don’t exist. They exist everywhere in Africa and even in the world at large but the case of Africa calls for global attention. If we think as Nigerians burning down shoprites, DSTV office, MTN office is the solution to these problems we miss the point. I hear Nigerians calling for the Nationalisation of this South African owned companies and I just laugh. How many Nigerian owned companies have lived up to fifty (50) years? A country were it is even difficult to manage the railway even with its resurrection, it is still a problem selling tickets.

As Africans, the ball is now in our court and we need not begin to blame anyone but we must be responsible for our failures as a people and as Africans come together to rebuild the lost moral values we have as Africans so that as we work towards a United States of Africa what will constitute this possible road map is me and you as human beings to respect one another irrespective of our geographical provenance and see the human person for what it is.

May those who have died in this unfortunate situation and have become victims of what we constituted for ourselves as a people both in South Africa and other African Countries, may your blood speak for Africa as you become the Martyrs of Africa and for the sake of Africa. May your killers realize that your death is just a distant time for their own death and at the end of the day we shall all live the earth which we thought is a place we would forever by killing others.

Africa and African must rise above this condition.