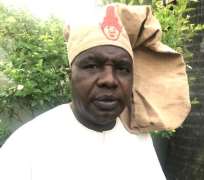 The President of Oodua Peoples Congress (OPC), Aare Prince Osibote has expressed the displeasure of the Mainstream OPC for being alienated in the purported security arrangement of the South West in partnership with the Nigeria police and other security agencies. In a statement made available to The Nigerian Voice and signed by Aare Prince Osibote, the organization insists that "Dr Frederick Fasehun founded OPC, so any other organization or person parading the nomenclature called the OPC is fake, counterfeit and dubious"

Below is the full statement as obtained by our medium:

It is not in the character of the Yoruba to dance unclad. It is only those that the gods must make mad that choose to dance unclad in the market square. An Omoluabi knows that his name is priceless.

As refined, cultured and disciplined characters that are building and consolidating the enviable legacy that the Oodua People’s Congress (OPC), bequeathed the Yoruba Nation through the founder, Late Dr Fredrick Fasehun, we are not made for the ways of the gutter. We do not as well have a miserable tendency for quackery and mendacity.

For the umpteenth time, I am reiterating that Dr Frederick Fasehun founded OPC, hence, any other organization or person parading the nomenclature called the OPC is fake, counterfeit and dubious.

Whoever goes about using the name for any purpose anywhere and in any quarters should be regarded as illegal and being unlawful and out to foment trouble and cause chaos in Yoruba land and in the Diaspora. Any such action is a disservice to the Yoruba nation and constitutes an affront to the spirit and soul of Dr Fasehun, who staked all that Oduduwa endowed him with to project the virtues of the progenitor of the Yoruba race.

In the last few days, my telephone lines have been perpetually abuzz. Aside torrents of visits and text messages, I am bombarded with calls across the country, Europe and across the world over the treachery against OPC.

Millions of Yoruba are apprehensive because of threats to the harmony engendered by the OPC among the race. They are concerned that the frightening security situation in Yoruba Land and efforts to evolve an appropriate strategy to tame the menace has exposed the unrelenting bid and desperation by Gani Adams to use the OPC platform for all manner of negotiations.

Some weeks ago, Gani Adams took on the governors from the South-West describing them as weaklings, who could not confront the Federal Government and the governing All Progressives Congress (APC) national leaders over stark realities on the worsening insecurity in the zone. Gani Adams had accused the governors of reducing him to a mere spectator at a security summit organised by them in Ibadan, the capital of Oyo State. Shortly after, Gani Adams latched on a similar forum organised by a motley crowd of hirelings to take the governors to the dogs. Only for the same Gani Adams to make a sudden volte face this week at another forum involving the governors on security issues in Yoruba land.

Our main concern in the OPC is the fact that Gani Adams is unrelenting in his false and open declaration that he is representing the OPC, founded, funded and sustained by Dr Fredrick Fasehun, the iconic, enigmatic and visionary son of the Yoruba nation and true descendant of Oduduwa. Equally astonishing and awful is the acquiescence of the other interests that represented the establishment and traditional institutions at the summit held this week in Ibadan. Beyond the razzmatazz that characterised the talk show, Gani Adams and his co-travellers in the traditional institutions obscured facts with prevarication.

Here are some samples. It is quite clear and obvious that the Police top hierarchy have not conducted due diligence on the authenticity of the claim by Gani Adams that he belongs to the OPC, which maintains a deep and firm root at the base of its founder and the family. While no one is in fallible, a critical institution and establishment like the Police must know that the margin of error after fact-checking on the OPC, Gani Adams and his fallacious claims would have paled into insignificance with due diligence. No establishment or institution can duplicate the OPC founded by Dr Fasehun and currently under my leadership. Gani Adams and his acolytes will soon end their season of grandstanding and delusion. He said he and his sprats declared the Myetti Cattle dealers as persona non grata in Yoruba land; overnight he is desperately currying their favour through a charade of a security project.

Definitely, it is not too late for the authorities to take the appropriate steps in that regard. We are not cowards, but nobody or institution of government should attempt to supplant OPC or collude with Gani Adams who, instead of dusting the file of the organisation he co-founded with some rebels when they left OPC to remain afloat, is envious of the status, class and acceptability of the OPC under my supervision and direction. We do not want a repeat of the ugly incidents foisted on the OPC by the rebels which led to loss of lives of police officers and responsible and disciplined OPC members many years ago. The exit of the rebels was to say the least good riddance to bad rubbish as the OPC with its headquarters at Okota in Lagos remains better organized - structured and disciplined.

The vision of Dr Fasehun when he founded the OPC in 1994 is sacrosanct. It is not a political organization. It has no intention, plan or agenda to either transform into a political party nor merge or even form an alliance with any political party whatsoever. It's cardinal aim and objective remain the protection of the interest of the Yoruba nation, promotion of its cultural heritage and enhancing the human capacity of the Yoruba race.

On the last note, we are proud of the traditional institutions in Yoruba land. As the epitome of Omoluabi, as well as the custodians of the customs and tradition of the Yoruba, our Obas are revered as the father of all. Therefore, the Kabiyesis must at all times be seen and accepted to be living and acting above board, and constantly treading the path of truth, honour and integrity.

Where his Royal Highness decides to descend from the Olympian height of honour and integrity to base cronyism, then it is "Double Wahala for Dead Body" in the words of legendary Afro music king Fela Anikulapo-Kuti.

We advise that while Gani Adams gallivant and gloat in his clad of a particular honorary chieftaincy title, the Source should keep its head higher, and not cringe in whatever condition.

The OPC is one and I remain the President. The police authorities must publicly declare the OPC they are partnering with on the security package for Yoruba land. The OPC has no duplicate.