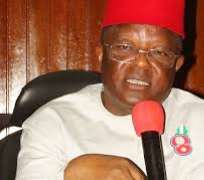 Ebonyi State Governor, Chief David Umahi said he has met with President Muhammadu Buhari to intimate him on quite number of issues affecting South East which security and critical infrastructure topped the list.

Governor Umahi disclosed that beyond his request for extension of the runway at the Akanu Ibiam International airport, the issue of security in the region and the nation in general also came to front burner.

In a report signed by the Chief Press Secretary to the Governor, Mr Emmanuel Uzor, Chief Umahi commended Mr. President for giving him audience at the shortest notice, describing him as a father to all.

The Governor said he intimated the President on their earlier request for railways and extension of pipelines and gas station to the region as well as upgrading Sam Mbakwe airport which has become alternative airport for the people of the zone.

He said he was at the Villa to seek Mr. President’s audience with the rest of the Governors and leaders of Ndigbo spanning across all segments of the society to discuss issues affecting the zone.

He lamented that over a period of time now, suspected foreign herdsmen have infiltrated the zone resulting in insecurity such as killing and kidnapping of innocent farmers and other natives and called on the federal government to intensify efforts with the Governors of the zone to secure lives and property of the people.

The Governor also sought the approval of Mr. President for speedy commencement of the renovation of the Enugu Airport and upgrading it to an international standard by completing the cargo section and her international wing.

Governor Umahi also visited the Minister of Aviation, Hadi Sirika to intimate him on his meeting with President Buhari as regards the airport project to commence and be executed in good time and in specification.