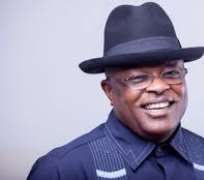 Following the request for the approval of an airport by Ebonyi state government, the Federal Government have approved the construction of a new International Airport in Ebonyi State.

Minister for Aviation, Hadi Sirika conveyed the approval in a letter to Governor David Umahi.

In a letter signed on his behalf by the Director, Safety and Technical Policy, Capt T A Alkali of the Ministry, the Minister said the approval followed the visit of a Technical team from the ministry and its agencies to the state on inspection of the proposed site for the airport.

"I am directed to convey approval of the Honourable Minister of Aviation for the construction of a state owned/financed International Airport on the inspected site", he wrote.

The Minister however noted that the approval is subject to the State Government's fulfillment of certain requirements.

Other requirements according to the Minister include: Issuance of Security Clearance from the Department of State Services(DSS); removal of all obstructions on the site and involvement of the Ministry and its relevant agencies at every stage of the development of the airport to ensure compliance with Standards and Recommend Practices (SARPs).

With the approval all is now set for the smooth take-off of the construction of the airport.

The airport is to be sited in a big expanse of land at the boundary between Ezza South and Ezza North local government areas.

The approval comes at a time when the only International Airport in the Southeast, located in neghbouring Enugu State has been shut down by the Federal Government indefinitely.

The Federal Government said it shut down the airport to effect repairs on its dilapidated infrastructure including the runway.

Despite playing host to two out of the top three market hubs in the country located in Aba, Abia State and Onitsha Anambra state, the Southeast have lacked adequate infrastructure to aid import and export of goods from the region.

The new airport is expected to help in opening up the zone as well as neighbouring Cross River and other States in the South-South and North-Central zones.