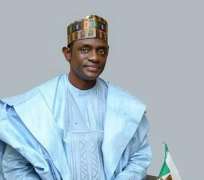 Governor Mai Mala Buni of Yobe state has said that the Trucks’ Transit Park (TTP) project will create 5,000 jobs and bridge the infrastructure deficit in north.

The 50-hectre project will be furnished with electricity, portable water, access road and a clinic to meet truck drivers’ health needs. Buni disclosed this Wednesday at the ground breaking foundation laying ceremony in Potiskum, 100 kilometres west of Damaturu, the state capital.

He said the park, was a pledge he made during his electioneering campaign and at a recent town hall meeting.

According to him, the 5,000 jobs and their multiplier effects, will transform wealth creation to improve the state’s economy.

His words: “As the town with possibly of highest concentration of trailer trucks in the whole North, Potiskum would be a lot better with the establishment of park project. “With ever growing trucking businesses under a single truck haulage hub, the town will be cleaner and less congested

He assured the Nigerian Shippers Council (NSC) and other partners that government will continue to take all measures to ensure a friendly investment climate.

“The public - private partnership and other economic policy measures will intensify efforts of promoting economic growth and job creation,” he said.

He said the safety, cost and efficiency of transport services influences the trading environment and competitiveness of export goods, including imported ones at international market.

According to him, the Potiskum park, is a modern road transport infrastructure designed for the safety of cargo and truck driving standardization. He said the park, is primarily intended for short-term safety breaks and long term services in high use corridors.

He said some of the facilities at the park, will include fuel gas stations, mechanic workshop, hotels/motels, banks, garage/ parking lots and training centres.