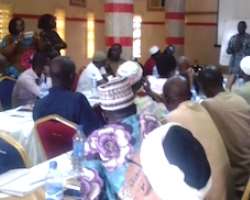 Religious leaders have been charged to take the issues of family planning, reproductive health, infant and mortality deaths serious than ever.

The call was made in a 3-day workshop with religious leaders drawn from the Muslim and Christiandon organized by the Challenge Initiative in collaboration with the Delta state Ministry of health in Asaba.

Speaking, the state coordinator of the NGO, Mrs. Nwanne Kalu, said the workshop was aimed at using the Islamic

She noted that participants are supposed to form what is known as the Delta State Interface Forum, "and work out modalities of engagement with other religious leaders and also their congregations".

She also expressed hope that it would build the opportunity to Interface with policy makers who are also members of religious groups.

A participant, Alhaji Ahmed Mustapha Ahmed, noted that the workshop was timely and a welcomed development as it creates the educational platform for both religions to create the awareness in their congregations.

Alhaji Ahmed who is the state chairman of the Delta state League of Imans, appreciated the organizers for recognizing the place of religious leaders in family planning.

"They seems to know that our religious leaders are influential, when they talk, people will listen. If we make it as part of our preaching, people will know exactly what we are talking about".

He said the government is doing the needful by taking the advantage of the influence of the religious leaders to pass the message across to her citizens, saying "We must reduce mortality and infant death rates in this country. International bodies made us to believe that Nigeria has the highest rate of infant and mortality deaths.

"For us to correct this, they have done the needful by coming to the religious leaders to help diserminate this information".

Also, Revd. Fovie Julius, said the programme was an eye opener to their responsibilities which has been unknown to religious leaders.

"We are now aware that as leaders in the Christian faith, we need to preach from the altar. As a pastor or preacher, people tend to believe more on what we say because we are like a role model to a lot of persons.

"So, from today, we are going to inculcate it into our sermons and messages the need to observe family planning to save our women from untimely deaths and diseases so that they can enjoy the fruits of their labour".