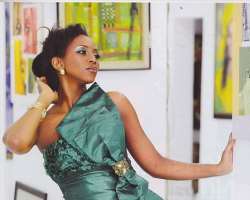 It is almost an incontrovertible truth that many Nigerians do not see anything good in the country. It is even more evident that most of the citizens do not understand what patriotism means, let alone loving the country enough to fight for its name. There are also others that love the country so much that they would travel on the ship of pointing out the inadequacies for the leaders to provide solutions. Which of the schools of thought is right is a matter of debate for another day, but it is a thing that would at least gladden the hearts of many Nigerians to learn of the ship of reckoning into which a Nigerian was made to sail not too long ago. Though her 'appearance' on the show took place sometime ago, it has nevertheless opened a new vista in the debate concerning the viability or otherwise of the Nigerian movie industry popularly called Nollywood.

This was when the popular and world-acclaimed American Television impresario, Oprah Winfrey, accorded one of the Nigeria's finest in the movie industry and screen idol, Genevieve Nnaji, some recognition on her global TV show. The delectable Nnaji was recognised as one of the most famous human beings in the world. As far as the entertainment scene is concerned on the African continent, it was said that in the survey carried out to determine those who are most popular the name of the Nollywood actress consistently came up as the headliner.
Though Nnaji did not appear physically on the show as some media reports have suggested, she was interviewed via telephone on two different occasions by Oprah Winfrey's crew.

Nnaji, the sultry actress that makes very impressive interpretation of her roles in movies and convincingly put herself into making the characters come alive was born on May 3, 1979 to parents, who hail from Mbaise, Imo State.

She is not only known all over the continent for her various performances in several movies in which she has featured, she is also a singer, accomplished model and philanthropist through her contributions to charitable courses.

In 2004, she surprised many in the entertainment industry by revealing of one of the open secrets of the time as she signed a recording contract with EKB Records, a record label and artiste management company based in Ghana, thereby signaling the beginning of her music career. Subsequently, she released her debut album entitled: One Logologo Line, a blend of R&B, hip-hop and urban music that gave the impression that it was an effort created by a Ghanaian musician and deliberately made for the Ghanaian music market.

In 2008, she also explored another arena of creativity that saw her launch her own clothing line, 'St. Genevieve', which was probably one of the first clothing lines to be seen from a player in the entertainment pitch. 'St Genevieve' as a clothing line donates an appreciable percentage of its proceeds to charity.

Nnaji, one of the most notable and best-paid actresses in Nollywood, in an interview expressed appreciation for the honour done her by Oprah Winfrey and said:

“Humility, joy, different feelings. Pride. I am just grateful to Oprah and her crew. I am honoured and humbled. It's a great privilege and I am sure I will replay a million times over, Oprah calling Genevieve Nnaji. I am also proud of myself because I believe I have sacrificed a lot and worked hard and so to be identified alongside all those other leading lights in their respective continents on a show as globally recognised as the Oprah Winfrey show is a thing I see as a little reward from God and the good will of my loyal fans. “To be identified for work that I have done in my own little Nigerian box is truly gratifying to me.”

She is not the only Nigerian to get honourable mention or profile on the Oprah Winfrey show. Not too long ago, another Nigerian and this time a writer was also singled out for praise.

Uwem Akpan, a Nigerian writer and author of 'Say You're One of Them' had his book chosen as the 63rd book selected for Oprah's book club.

The author said he was 'very, very humbled' to know that his debut collection of short stories was selected by such a book club. It is expected that the selection would trigger the sale of million of copies of the book.

'Say You're One of Them' thereby becomes the first book of short stories to be added to the two-million-member strong Oprah's book club. She hardly selects short stories because, according to her, they always seem incomplete and leave a reader hanging on the thread of the plot and wanting more. However, she confessed that the engaging and wonderfully crafted stories of Uwem Akpan, after reading them, left the club 'stunned and profoundly moved'.

The author runs a parish in Lagos and said due to work with his parish, he's been too busy to work on another book and that the church still supports his writing.

With almost two million online members, Oprah's book club is the biggest in the world and books chosen for the club usually end up becoming bestsellers.

'Say You're One Of Them' is a collection of five short stories and it was published in 2008. The stories are from the perspective of an African child that captures the resilience of children growing up in the face of unimaginable devastation and harrowing circumstances.
President of the Association of Movie Producers of Nigeria, Paul Obazele, while speaking to Saturday Independent on the profiling of Nnaji as the most famous African in the movie terrain, said: “It is a great and commendable thing. We thank them because it is the first time that anybody would see something good in Nigeria. I hope it continues and sends a good signal to many of our young girls, who think that it is only by sleeping around or through doing things that are evil before one can make it or achieve something great.”

Though aware and appreciative of the huge impact of such recognition in her life and the industry at large, Nnaji decried the statement credited to Oprah that the average Nigerian earns $400 a year, which amounts to around N60, 000 per annum and once again called on the
Nigerian government to recognise and fund the Nigerian movie industry as the most viable medium of exporting Nigeria's image.

Whether you love her for her bravado, her chiseled face, her acting or hate her for what some call her arrogance, the many controversies falling over her back like her adorable hair; the fact that this is one Nollywood personality that commands respect from far and near would probably no more fall into the mud of a debate.