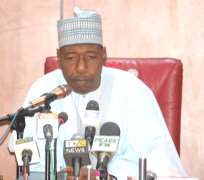 Borno State Government has signed a contract agreement for the Construction of 1,700 Houses for low income earners among civil servants in the state.

Similarly, the agreement also consist of construction of over three thousand houses to the internally displaced person in the rural Centers which will be paid by the state government in fifteen years those for the civil servants will be deducted from their monthly salaries in twenty five years.

The contract was with Family Homes Funds LTD, the company that will finance the project in which the MD/ CEO Mr. Femi Adewole signed on behalf of his company while State Commissioners of Reconstruction, Rehabilitation and Resettlement and that of Housing and Rural Electrification as well as the Justice/ State Attorney General (SAG) also signed the contract agreement on behalf of the Borno State Government.

Speaking during the signing formalities at the Governor's Lodge in Abuja, Governor Babagana Umara Zulum assured that those who supposed to benefit from the houses will be selected and government will ensure speedy completion of the project and actualise the construction towards reducing accommodation shortage in the State.