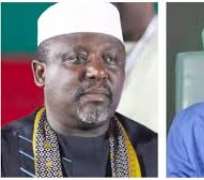 The Chairman, All Farmer’s Association in Imo state has opined that by trying to recover the alleged loots of the past administration, Governor Ihedioha has demonstrated that he was out to govern and expects anyone that would take over from him to remain steadfast in that line, describing it as the only antidote to bad leadership.

Col Iheanacho while expressing worry over the dilapidated state of Imo roads, stressed the need for all hands to be on deck in ensuring that the present administration of Governor Ihedioha in the state succeeds.

The elder statesman, who recently donated over fifty hectares of his personal land to the Imo state government, maintained that his reason for doing such was to encourage government on the need to boost agriculture in the state.

The Ngor-Okpala born Retired Senior Military Officer further advised the state government to use the land for agriculture, expressing optimism that the sector would improve if attention was given.

While advising Governor Ihedioha to carry every zone along in the allocation of government programmes and resources, called on the people of the state to support the present administration which he said was out to rewrite the wrongs of the past government.