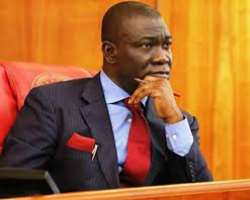 GERMAN police authorities, Landespolizie in Nuremberg, Germany have disclosed that no arrest has been made and will be made in connection with the Saturday attack on Ike Ekweremadu, the former Deputy Senate President.

Ekweremadu, who represents Enugu West in the Senate, was in Nüremberg for the New Yam when some aggrieved members of the proscribed Indigenous People of Biafra (IPOB) attacked him.

The police authorities, according to a post by icirnigeria.org dismissed the attack as “just a protest” and said no arrest was made and didn’t have plans of making any future arrest.

“There was nothing much about this senator from Nigeria that came. About 30 persons demonstrated against him and the police were called and they calmed the situation down and the senator drove away in his car.

“Nothing happened, so there is not going to be any arrests. No arrests were made, nothing. No police investigation will be carried out in relations to the chaos,” said a police press officer in Nüremberg.