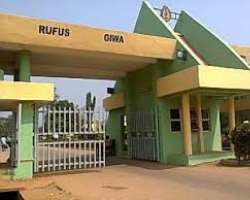 Nearly one year and a half ago a new Governing Council of Rufus Giwa Polytechnic, Owo was inaugurated by the Governor of Ondo State Arakunrin Rotimi Akeredolu. It was one of the Governing Councils put in place on 15th March 2018. Others are those of Adekunle Ajasin University – Akungba – Akoko, Ondo State University of Medical Sciences, Ondo, and Ondo State University of Science & Technology, Okitipupa. A major problem of these institutions (like many of its type in Nigeria) is that of inadequate funding. This can be identified as the main cause of the agitations by thestaff and students of the institutions. Fees cannot be arbitrarily increased as this will bring hardship and burden on the parents. The Governor did say at the inauguration of the Councils of his willingness to fund the institutions to the level of the available allocations and the Internally Generated Revenue(IGR) of the state. He advised the various councils to improve on the Internally Generated Revenue (IGR) of each Institution.

Despite the financial challenges of Rufus Giwa Polytechnic the success achieved by the Banji Alabi led RUGIPO Council are numerous. To list a few: Internet penetration on Campus, Establishment of Huawei ICT Academy with 100 students on admission, all servers damaged during the February 2018 riots, have been recovered with complete Restoration of the ICT Centre, Reducing the 9months outstanding salaries (owed by the defunct PDP administration) to only four months, Appointment of Auditors to audit the bursary, establishment of school fees payment platform instead of paying through a contractor, Contractors are back on site to complete the abandoned government projects on the campus, and the purchase of utility vehicles for the principal officers etc.

Most of the comments and pictures painted about RUGIPO on the social media, cannot be justified by the facts on ground. Mr Alabi was an already quite comfortable before venturing into politics which now seems to be his albatross at RUGIPO. However, his support and that of his entire team on Council, for Arakunrin Rotimi Akeredolu and their interest for the larger Owo kingdom and that of Ondo State in general is, borne out of their genuine love embedded in truth and thorough services to humanity as the bed-rock of life. They believe in what is good for the system and that is what they are working hard to achieve.

The process to rebuild Rufus Giwa Polytechnic, even almost immediately after the want on destruction of facilities cannot be done without some hard decisions. would definitely have some toes stepped upon. A lot of things went wrong in the system long before then which must be put in place. It required a lot of sacrifice for a better future of Rufus Giwa Polytechnic, Owo. That is the reason for the reorganization and reforms that are going on at the polytechnic.

Let us take just an aspect of the reforms. The staff school issue is a long drawn one, like most staff schools of various higher institutions. Most members of staff at the University of Lagos had children that went through the International school, staff school, and the Women Society nursery schools. The nursery school was owned by the Women Society of the university while the staff school was managed by the university. The economy of the country was buoyant, and everything went smoothly then. The women Society of the University, that had the long had Nursery school, later added the Primary School during the era of Mrs Olusola Ibidapo-Obe as leader of the women. These institutions had nothing to do with the university apart being within the university Campus. They built the structures of the Primary school as it is today from the prudent management of the Nursery school funds accumulated by the women society since the era of Mrs Ade-Ajayi as leader. Their staff, both at the Nursery and Primary levels were not paid from the funds of the university. No wonder then, years later, Unilag too, joined others of its type like university of Ibadan in withdrawing from the running of its staff school which hither-to, too, has been run by the university at a loss!

This did not go-well with the staff of the school and the union to which they belong because many had put in many years in the service of the school before the university decided to take off its “hands” from the running of the school. This is precisely what is taking place in RUGIPO like it is in FUTA and other higher institutions that had adopted the practice for years.

If an individual could run a school or college like Chrisland Group of schools (which now has a university or Adesioye group at offa) how come Institutions like Rufus Giwa Polytechnic and others of its kind will be running their staff schools at a loss? This writer was made to understand that the RUGIPO staff school gulps well over a hundred million naira annually with an income of less than five million! This is one of the problems that the Banji Alabi led Governing council is trying resolve through withdrawing from the running of the school. A business that is not yielding profit will have to close-shop.

No staff will lose his or her job as the new investors will take over fully all of them under ‘their own terms’ of employment which cannot be less than what they are at present. It could even be better a situation too, where there were thirteen chief Nursing Officers/ Matrons at the Health Centre or as many as twenty-two deputy Registrars cannot be accommodated by the meagre income of the institution. These are just a few of the irregularities the current Council met on ground. There has to be rationalization of sort to move the place forward. The problem of overstaffing there too, is another issue. The Council is trying to find a way out of solving the problem of what to do with the well over 400 staff identified during the verification exercise ordered by the government.

The self-inflicted problems are many but those created by the various Unions of the institution is what this writer is worried about. Workers Unions, everywhere are to see that their men are not ill-treated by the organizations they work for. It is also the duty of the management of such institutions to see that they do the right thing for their workers. When this new Council at RUGIPO come on board, the workers were owed about nine months salary including several years of pensions, gratuity and co-operative deductions that were in arrears. Several on-going projects were completely neglected or abandoned by the contractors due to non-payment for work done. The Governing Council at inception, set up a small committee to look into how to get over this rather chronic problem. The Unions were carried along and were aware of the efforts of the new Governing Council to get them paid what RUGIPO was owning them.

With the support of the Ondo State Government led by Arakunrin Akeredolu, the Governing Council on two occasions got “Intervansion fund” to reduce the salary arrears owed to four, to be at power with that of the civil servants then. The Government promised to pay up it dues and add “Intervention fund” too, when it has enough fund. The Unions are aware of this.

The government is not unaware of the financial problem of RUGIPO just like it is at Okitipupa (OSUTECH) Akungba (AAU) and Ondo (OSUMED). All these institutions are finance starved too because the state government shares its received allocations to all agencies under its control just to make sure it goes round. Also, TETfund and OSOPADEC has been helpful too in assisting the institution in getting some of the projects abandoned to get started again. Their intervention funds are usually to upgrade projects. Ondo State Government gave RUGIPO an intervension fund to

complete some buildings. The Rectory and the Bursary buildings and others will be ready for occupation in under four or five weeks. The Unions are aware of this effort of Council to get more funds to pay the outstanding funds. The stand of one of the Unions in particular to “grand” to a stops activity because the Management and Council could not accede to most of its demands, is therefore difficult to understand; even to the extent of writing damaging letters to the government and NTBE not to talk of theill-advised advertorials that does nor portray, the Management, Council and Government in good faith to the public.

ASUP had in one of its memos “acknowledged the fact that the current Council of Rufus Giwa Polytechnic – Owo is made up of men and women of virtue, academic and professional excellence”. It however, noted that the handling of the problems of RUGIPO by the Council (even after all the enumerated successes) is below average. It went further to state that the low performance of Council (by their own judgment) be placed on the door step the Chairman. This brings a different and new dimension to the ongoing problem there. How does the chairman control these men and women of Council adjudged to be noble in character and valour.

That the chairman of Council can manipulate the calibre of men and women on Council seems strange to this writer. He believes something has gone a-miss-somewhere! When the Unions continued to pressurize The Management and Council on its demands (not unusual of workers Unions), Council appealed to them to understand that it was not unaware of what is right but that it will not tolerate acts of violence or disturbing the relative peace (since the riotous one of February, 2018) on CampusPreventing workers from going about their duties, or asking lecturers not to teach, or supervise examinations is unfair to students and locking of the Polytechnic gates against willing staff who want to work, too, is considered to be unfair.

ASUP however later rescinded its decision by allowing examinations to go on after the intervention of some elders within RUGIPO led by Dr. Obanoyen, the institutions Director of Health Services. It is believed that the current problem might have some political under tone which must not be allowed to stand. This latest memo in circulation shows that it is targeted at the chairman of Council and indirectly the Council as indicated on pages five and six. “Oro to ba oju, ba Imu” i.e what-ever affects the face equally affects the nose. It is unacceptable to Council to rubbish its members as contained in their letter to the commissioner. The ASUP is currently under suspension, its activities and leadership too are equally regarded to be non-functional.

The ASUP leader and the Council chairman are both natives of Owo and known to belong to the same political group. But like in any political setting, there is bound to be different “camps” with different views. This is what should not be carried to the affairs of RUGIPO.

We appeal, kindly “Allow RUGIPO TO BE”.