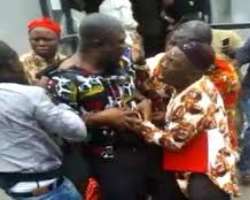 A former Minister of Aviation, Chief Osita Chidoka has condemned the attack on the immediate past Deputy Senate President of Nigeria, Senator Ike Ekweremadu in Germany, Saturday by miscreants.

Ekweremadu who was invited to Germany for the Second Annual Cultural Festival and Convention organised by Ndi-Igbo in Germany, was billed to give a keynote address at the event which held in Nurnberg Saturday. The former DSP was invited to the cultural festival alongside the President-General of Ohanaeze Ndigbo, Chief Nnia Nwodo, who, eventually did not make it to the event.

It was gathered that Ekweremadu was given a resounding welcome by Ndigbo in Germany and everything went smoothly until some men stormed the venue of the cultural festival and began to complain about the killings in the South East. The melee brought an abrupt end to the event, while the senator was seen in a video that went viral attempting to leave the venue amidst attacks by the miscreants.

The organisers of the event were said to have subsequently invited the police.

Speaking through his media assistant in Awka, the former Chief Executive of the FRSC, Chidoka said he condemned the attack in its entirety and demands an unreserved apology by the perpetrators of the unwarranted attack.

"‪I demand an apology by perpetrators of this unwarranted attack on Senator Ike Ekweremadu. I condemn it.‬" Chidoka said.

He said Ekweremadu never supported the operation python dance and did not participate in the plan for the operation in the south east.

"‪Ekweremadu did not participate in the plan for operation python dance. He opposed it." he said.

Chidoka revealed that Ekweremadu had led delegations to President Muhammadu Buhari on release of the IPOB leader, Nnamdi Kanu.

"‪Ekweremadu led several delegations to President on release of @MaziNnamdiKanu and spoke out at critical times in support of Igbo causes. He does not deserve this treatment." Chidoka said.