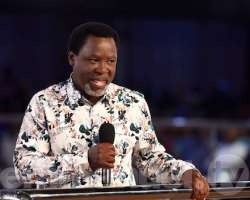 As the international community watches events unfold in the world city, Hong Kong, which has been gripped by large-scale government protests for over four months, Hongkongers are flocking in increasing numbers to an unlikely destination in Africa.

Known as a significant economic player in global affairs, many international economists and business people are concerned with the evolving incidents gripping Hong Kong and its effects on the world economy.

However, despite the city-wide protests, there have been an influx of Hongkongers who continue to visit Lagos, Nigeria on a bi-monthly basis. Research reveals they are bound for an area called Ikotun-Egbe in the outskirts of Lagos, specifically to visit a mega-church called The Synagogue, Church Of All Nations (also referred to as SCOAN) headed by the prominent cleric, T.B. Joshua.

Within the last two months, a staff at Nigeria’s Murtala Mohammed Airport estimated that over 100 had flown in from Hong Kong to visit the popular church for religious tourism.

It appears they go for a myriad of reasons. On Sunday 11thAugust 2019, Miss Ho Tsang Ki appeared on the Christian television network ‘Emmanuel TV’ to state how she received ‘healing’ from a grave nose problem through Joshua’s prayers.

In the clip, subsequently uploaded to Emmanuel TV’s popular YouTube channel, T.B. Joshua, often referred to as ‘Prophet’, utters the following words publicly to the massive multicultural audience: “There is a woman among the Hong Kong visitors – you often bleed through your nose. You use some pills to stop this. This has been a family problem. I am telling you, it has stopped right now, as I am talking. Right now, God has healed you and it shall be permanent.”

Promptly walking out from amidst the crowd, Ki boldly stated: “I am the one who used to have nose bleeding. Man of God, please deliver me today”.

In her subsequent ‘testimony’, Miss Ki started by recalling the complex problem that saw her go all the way to Africa. “Since I was 6 years old, I had a nose problem that resulted in me having difficulty in breathing and I could not smell”, she explained. “After a visit to hospitals, doctors inserted something into my nose and it was very painful yet there was no solution,” she continued. “But now, after the prophecy and prayer, I can breathe well and smell normally!”

Another Hong Kong woman standing beside Ki spoke introducing herself as Ki’s friend. “My friend had a severe nose problem for a very long time. She is free now and can breathe well”, Mak Wing Kwan confirmed.

Ki’s testimony, coupled with the continued visits of Hong Kong citizens to The SCOAN despite the sustained protests, show they seem to be recipients of the ‘blessings’ which thousands of religious pilgrims seek in their visit to Joshua’s church.

Indeed, according to Nigeria’s Immigration Service, of every 10 international visitors entering Nigeria, 6 are bound for The SCOAN.

“Perhaps the leaders of Hong Kong should seek God’s counsel at SCOAN at this time as its nationals are doing,” read one of the comments under Ki’s video. T.B. Joshua is not new to advising political leaders on the quagmires they encounter in their work: late Atta Mills, Joyce Banda, George Weah, John Magafuli are some of the heads of state that are reportedly known to publicly seek advice from the cleric.

Gareth Watson is a journalist covering Sub Saharan Africa with a special interest in religious stories. He is based in Cape Town, South Africa.