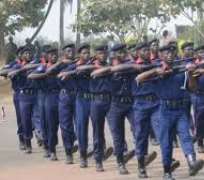 Borno State Government has finally launched "Agro Rangers" Special Squad to give protection to rural farmers across the 27 LGCs and even Sambisa Forest towards enhancing food production and food security across the state.

While launching the special squad at the Multi Purpose Hall of the Government House, Maiduguri Wednesday, Borno State Governor, Professor Babagana Umara Zulum said " today marks another milestone in his history of our dear state, as we launch the Agro Rangers special squard unit to provide security to our teeming farmers and reduce or eliminate farmers/herders clash".

"We are deploying 75 personnel of NSCDC and 120 CJTF, hunters and vigilantes who just graduated from the NSCDC School of Peace in Katsina where they received specialized military training.

"Very soon we are going to train another batch of 150 to expand our outreach. The recent renewed Boko Haram insurgents' attack in Jakana, Nganzai, Gubio and Dalori is not going to defile us . We are going to sustain the fight until we win the war against Insurgency ", Zulum said.

"Our doors are always opened. I call on the members of the insurgents to use the opportunity created by the Federal Government . Operation Safe Corridor" to laydown their arms to give peace a chance", Zulum added.

He also said Borno State Government will not relent in supporting the security outfits in the state with the needed logistics, adding that security is number ine priority of his administration.

Speaking at the occasion, the Commandant General of NSCDC, Alh Abdullahi Gana said "the statutory mandate of NSCDC is protection of critical national assets and defending the defenceless.

"The story of Agro Rangers started in 2016 when the then minister of agriculture, Mr. Audu Igbeh paid courtesy call to the minister of internal Affairs, General (Rtd) Bello Danbszau, where he demanded for agro rangers to Man 2,500 Agro allied industries", Gana said.

The Commandant General who was represented by the ACG , Barrister Augustine Obiekwe said " Borno state is the first to benefit from this programme. Due to the prevailing situation and peculiar circumstances of the state which has largely suffered from terrorist activities arising from insurgency ".

"The corp is aware and determined to fulfil its mandate and to assist the military and police to secure the liberated areas inother to assist the indigent to goback to their villages and farms.", Gana said.

In his welcome address, the State Commandant of NSCDC, Abdullahi Ibrahim said " Agro Rangers is a specialist squared to give protection to farmers and also to reduce farmers/herders clash.

" It also provide immediate medical attention to both the troops, farmers and even insurgents. The first batch includes 75 NSCDC personnel, 129 Civilian JTF, hunters and vigilantes.

" In this operation we are going minimize force as we believe in God and not in gun. Civil defence is peace and peace is civil defence", Abdullahi said.

In his votes of thanks, the ACG Zone C, Dr. Ahmed Audi thanked the governor for the partnership and support while assuring him that NSCDC will work in synergy with other security agencies to end the insurgency.