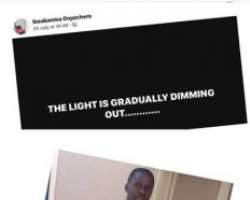 A senior banker   one of the new generation banks, Onyechere Ibeakanma, has committed suicide in his room in Victoria Island, Lagos, Nigeria.

Aged 46, Ibeakanma was said to have drunk  a poisonous substance which ended his life.

He  was married and had  one  daughter.
The banker allegedly took his own life on Friday, August 9, 2019, after leaving a note for his wife, Cecilia, who was out shopping.

In the note, the Relationship Manager of one of the new  generation  banks, said: ”The best, that's what I used to call you. Finally this is the end of my  journey  here on earth.

“The evil I have been battling with has succeeded in quenching the flame. You married a wrong man. You're a good woman and you deserve the best. You need to be happy. You need to soar. .

“Please take care of our princess, Chinenyenwa. Tell her that I love her so much. Be peaceable with everyone though not gonna be easy. Tell my family not to  harbour  any resentment against you. .

“You're a blessing to us . That's the wish of a dying man. Don't cry for me but pray for me. I love you and Chinenye so much.  Good Bye  My beloved.”

Bodedolu Reports quotes a family source as saying that Onyechere left millions of Naira in one of his  bank accounts , which dismisses any thought of action being connected to any form of financial hardship.

According to the online platform, the source, however, hinted that the banker had always exhibited some strange  behaviours  that no member of the family took it serious until his death.