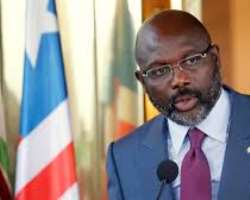 "The lion cannot protect himself from traps, and the fox cannot defend himself from wolves. One must therefore be a fox to recognize traps, and a lion to frighten wolves." — Niccolò Machiavelli

The opposition have lost sight of our founding principles in the discomfiture and misconstruing of Liberian politics. Fortunately for us, we have a detailed map. From the Congress for Democratic Change which bears the acronym CDC, we believe that society should be built upon a fragile network of relationships which need to be upheld through duty, traditional values and established institutions; the sovereignty of the people, and the basis of just government also matter. Far from being outdated historical vestige, these truths are just as applicable now as they were over one hundred and seventy years ago.

Though, in the last twelve years, our nation state was presided over by modern imported ellenocrats and boakaicrats, those who plundered the state resources, squandered opportunities and beguiled the people with rhetorics. But having successfully looted and damaged the state and dashed the hope of the people, the Political Leader of the CDC, now President of the Republic became tasked with the creation of a new system of national government that would guarantee the hope of the Liberian people, their livelihood and the liberty of each individual while also securing the support of each of the sub-political divisions.

If the Pro-poor Agenda for Prosperity and Development is the beating heart of the CDC-led government, CDCians are the body that brings it to life. The PAPD represents not only the supreme tool that drives the government, but is the most envied, most copied, and one of the most successful governing document in the history of the country. If the PAPD's system of checks and balances is the walls of a castle that keep the governing power within its proper limits, CDCians who fought for the victory are a group of individual suit of armor through which even planned underground strategies and sporadic attack from opposition and their power mongers cannot penetrate.

But who did the powerful hands empower to ensure that the PAPD is supported, defended and protected? Of course opposition. To destroy the image of the PAPD, destroy the government perpetually and bring President Weah bent on his kneels and craw on his belly, the opposition who occupy lucrative positions in the government have begun to secretly undermine the regime by using government resources to support opposition protests, campaigning in by-elections and damaging the good image and high earned integrity of Pres George M Weah to the International Community, while also empowering their fellow colleagues and partisans from the Unity Party, Liberty Party, Alternative National Congress, All Liberian Party amongst others.

The presence of those people in this government, after messing up the system twelve years ago will continue to cause more damage and create popular crime scenes in various government ministries and agencies they occupy. They have pitifully considered themselves in a peculiar manner the guardians of the Pro-poor mantra, they have made themselves an impenetrable bulwark against every opportunity that hit these ministries and agencies from international development partners; they have become much more politically and financially equipped and are ready to resist every decision that comes from the nation's Executive and the CDC Leadership.

Instead of them supporting the president's Pro-poor Agenda, working in the best interest of all and sundry, attracting development partners and investors, they have considered themselves more equal than others, and instead of bringing onboard competent CDCians who gave birth to the revolution, they have embraced slay queens who are acting as talibans and resident evils to make their mission possible. The head of Liberia Maritime Authority is the most disturbing example of this trend. Likewise, the sad case with the heads of National Housing Authority, Liberia Petroleum Refining Company and Liberia Revenue Authority who are masked as the 'beauties and the beast' respectively in the CDC-led government. Similarly, the heads of Civil Service Agency have converted their nasty farce to worst. They appear to love the president, but their intend is to gain a little temporary safety.

Finally, it is their so-called superiority and advanced mockery that represent the greatest threat to the small amount of CDCians in these entities. And as a result of their super appetite to generate wealth at the detriment of the state, administrative policies and regulations have been ignored, transparency and accountability have become administrative enemies, and qualified and competent CDCians are being subjected to the whims and culprits of professional rogues. Given these troubling developments, and the challenges it has wrought upon the regime, one may wonder if there is any hope of enacting meaningful change if these people remain in these lucrative positions.

Since the CDC-led government took office on January 22, 2018, CDCians have become the most active and successful people to stand opposed to every opposition attempt to violate the laws and orders that govern the state as enshrined in the revised 1986 constitution, and protections guaranteed to the government. With their unwaivering support and tireless efforts, the CDC has won two representative and one senatorial by-elections since the inception of President Weah into office. This is even more impressive given that CDCians have achieved victories on behalf of the party and government and the rest of the country in three out of six of these by-elections. Every day, people like Jefferson T. Koijee, Mulbah K Morlu Jr., Andy Slober Chea, Samuel Tweah, Phil Tarpeh Dixon, Emmanuel Mulbah Johnson, Emmanuel Ticonti Tutu Swen, Alvin Wesseh, Eddie Tarawali amongst others work to advance this most precious victory, restore what was lost, and fight for the future of the Liberian Republic.

The time where zealous men who struggled to make the revolution reach its finish line will enter into unholy political matrimony with white collar criminals and career crooks is over. If the CDC-led government will overpass the just bounds of its authority and make a better use of its powers, the qualified and competent CDCians who brought the party to its final victory must be given the opportunity to serve these top positions occupied by the opposition rascals; they must leave the state of being under men. These people are fully prepared to execute measures to redress the injury done to the regime by the ellenocrats and boakaicrats. The real enemies of the state are now known. The conscious line must be drawn between us and them and we are just getting started.