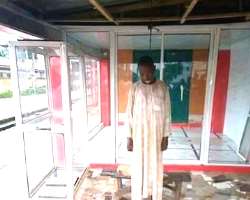 Panic engulfed residents living around the Stephen Keshi stadium along the popular Nnebisi road when the corps of a man was discovered hanging in front of a shop.

It was gathered Friday that the middle age man was found loitering around the Nnebisi road with cellophane bag.

A resident of the area who spoke under condition of anonymity told our corresponent that he saw the man lying down in front of the shop covered with wrapper.

Some others stated that the death of the man whose identity is unknown is believed to have been stage managed by his assailants. They noted that he would have been killed elsewhere and brought to the depicting that he hung himself.

When our correspondent visited the the scene of the incident, it was discovered that the deceased's feet were on level ground.

It was learnt that about 7:30am, operatives of the Nigerian police Delta State command came to evacuate the corps.

In another development, a young girl in Warri, has also killed herself as a result of heart break from her lover.

Details were still sketchy at press time.
But contacted on the Asaba, situation, the Police Public Relations Officer (PPRO), DSP Onome Onovwakporyeya, said she has not been briefed.