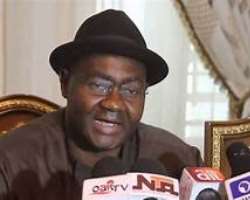 The immediate past Senator representing Rivers South-East Senatorial District at the National Assembly, Magnus Ngei Abe has said that the process of change in Nigeria’s democracy is still work in progress.

This is, as he called on politicians in the country to return power to the people by creating clear processes that can galvanize and determine the wishes of the people, and those in power must learn to submit themselves to the will of the people.

Abe who stated this when he appeared on a national television programme in Abuja, at the weekend, said that the time has come for political parties in Nigeria to adhere to the principles of internal democracy.

Senator Abe who was Chairman, Committee on FERMA at the 8th Senate said when this is done the parties will work to promote the overall interest of the country and that of its members, rather than serve the narrow interest of a few leaders.

“I think the time has come for us to address the issue of Nigeria, the kind of political parties that we have and what we should do to make the parties work better to serve the interest, not just of its members but the interest of the country at large.

Political parties that are truly democratic, that have clear rules of internal democracy, that allows the participation and free expression of will by its members.

I am concerned about what we can do to make our systems stronger to avoid this kind of violent situations being experienced in the country because if you look around not much seems to have changed. The same kind of scenarios that we witnessed in Rivers State and in other states of the Federation where some political parties could not produce a strong internal conflict resolution mechanism is still on-going.

There are no clear cut, all-inclusive procedures that could allow free expression of will by party members. I think all Nigerians, not just members of political parties but all citizens must be concerned about the direction of party politics in that respect.”

He reiterated that he has no personal grudges against Mr. Tonye Cole or Rt. Hon. Rotimi Amaechi but that the former Minister of Transportation should stop seeing himself as the only highway in the All Progressives Congress (APC), such that it is either everybody follows his decisions or be booted out of the party, noting that there is no such provision in the party’s constitution.

"I don’t think that members of the party even those who are with him (Amaechi) will agree with that attitude. The nature of power in this country is that people see themselves as helpless when the powers that be, have taken a stand.

We need to bring the party back together because a political party that cannot gather members to win an election is just like a social club.

To take over power, you need to have the capacity to build consensus and that is what we have been unable to do in the APC particularly in Rivers State and we are still open to that possibility.

I remain committed like other members of the APC to delivering change, not just to the country but first to the party itself and I believe that within the party we should focus on giving the power and the voice back to the people.”

Senator Abe accused Rotimi Amaechi of hiring a propagandist Eze Chukwuemeka Eze to falsely malign and de-market him (Abe) in order to justify the unjustifiable injustice that was perpetrated on Rivers People during the last political dispensation".

According to him, “When people have already done something wrong and realized that what they have done is not defendable, not acceptable and that reasonable people will not accept it neither can it be defended, they go back to create a narrative that justifies what clearly cannot be justified.

I have decided to ignore all those things because Amaechi himself knows that it is not true. Chief Eze who is saying it knows it is not true and the majority of reasonable people in the country know that those things are nothing but pure blackmail,” Abe stated.