Police arrest man with 17 bags of Indian hemp in Ogun 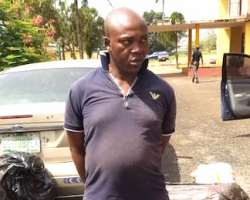 His arrest followed an information received by the policemen at Ibafo Division as his car was on its way coming from Delta State heading to Lagos loaded with illicit Indian hemp.

On the strength of the information, the DPO Ibafo Division, SP Abiodun Ayinde quickly led his Anti-robbery team to Lagos-Ibadan expressway where they laid ambush for the said car.

The police spokesman in the state, Abimbola Oyeyemi said "at about 6:30pm, the team sighted the Ford car with registration number GGE 782 EX and stopped it."

"On searching the vehicle, 17 sacks of Indian hemp was discovered there in. The driver one Daniel Elimuya was promptly arrested."

"On interrogation, he confessed being a long time Indian hemp distributor and that the one was arrested with was meant to be delivered to one “Kofo” in Lagos Island."

The Commissioner of Police in the state, CP Bashir Makama ordered the immediate transfer of the suspect and exhibits to State Criminal investigation and intelligence department for further investigation.