Tell Us What You Did With Your Previous Positions, Delta Governor Blows Hot On Former N'Delta Minister 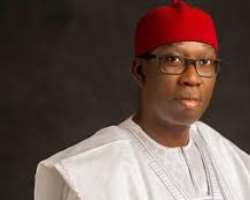 Following media attacks on the Delta state governor, Ifeanyi Okowa, by the former minister of Niger Delta Affairs, Godsday Orubebe, Okowa, has asked Orubebe to give account of what he did with his previous positions.

This is coming on the backdrop of Okowa's alleged refusal to give commissoner slot to the former minister.

Speaking Tuesday during the swearing in ceremony of 17 commissioners designate in Asaba, Okowa said: "I am not that kind of man that will be drawn into argument with our leaders. One of our leaders has been insulting the office of the governor".

According to the governor, "the fact that a leader made a request and it is turned down, it is not a fact that he will go to the pages of the newspapers and social media when such a leader has not contributed enough to the state government".

While challenging Orubebe to make public his contributions to Burutu council, Okowa said: "I Urge him to tell us what he has done with his previous positions", noting that balancing the equation was not an easy task.

"It took weeks of broad base consultations to come with the final list of the commissioners", appealing for understanding from Deltans.

"We did our best to carry everybody along. We are sorry, stay positive", assuring that all those who labour in the past or "in my electioneering, will be rewarded in one way or the other", Okowa said.

Meanwhile, he urged the newly Sworn-in commissioners to be humble while discharging their duties, saying "all commissioners stay humble. Being a Commissioner does not mean that you are better than others".

He charged them to ensure they instill peace in areas where there are factions, "rally all together for the sake of peace and progress. You must be willing to stoop to conquer in all situations", he advised.