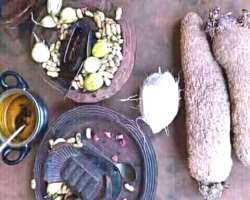 The people of Ezza Ezekuna are the descendants of Ezekuna, the first son of Ekumenyi. Ezza Ezekuna people are warm and itinerant farmers and warriors who ran enviable traditional peace-keeping missions since creation. In the Bible, Ezza was mentioned as the first among other tribes that helped David in the wilderness of Ziklag to overcome King Saul's army. Hence, in 1st Chronicles chapter 12 verse 8 - 9, Ezza people were described as "mighty men of valour, ... whose faces were like faces of lions, and were as swift as gazelles on the mountains". Through the chains of peace-keeping missions which Ezza Ezekuna people held for the reward of portions of the saved land which they use for their farming; and dints of hardwork, Ezza Ezekuna people are found in great numbers in other parts of Ebonyi State beyond their ancestral home - Onueke in Ebonyi Central Senatorial district; especially in Enugu, Benue, Kogi, Ondo, Ogun, Cross River and Anambra States. Ezza Ezekuna people are blessed with a rich cultural heritage which, like the umbilical cord, irrevocably binds all Ezza Ezekuna people at home and in diaspora together. This feature of Ezza Ezekuna people is further reinforced by their loyalty and positive disposition to their culture which has a lot of interesting festivals. Oke-aku, the New Yam festival of Ezza Ezekuna people is regarded as the greatest festival for two major reasons: One, Ezza Ezekuna people are basically farmers, and yam is unassailably the king of all crops. Two, Oke-aku festival usually starts on the New Year day, and so marks the beginning of the traditional calendar year and runs through the first traditional week of the year. A typical Oke-aku festival begins in the morning of Orie day with cross-fires of traditional greetings laced with good wishes and prayers for a prosperous and happy New year. Each family head is presented gifts by his wife/wives, adult children and other relations. The man in turn prays for his family, friends and relations; and blesses kolanuts which he shares among his people who eat same with specially-prepared pepper-paste called "uza ukpara". At the end of the kolanut ceremonies, the man shares remnants of old yams and palm kernels known as "nsa aku" among his family members, friends and relations. This symbolically marks the passover from famine period (unwu), when old yams, palm kernels and other local snacks known as "echa" are rationed, to the period of plenitude when new yams and other crops are harvested. Thereafter, the women go to prepare special dishes while the men source good palm and other choice drinks all of which will be enjoyed for the rest of the day. The rest of the days of the traditional week which are Awho, Nkwo, and Eke are used to visit inlaws, the poor and to pay homage to elders and constituted authorities. Orie which is the first day of the second week in Ezza Ezekuna traditional calendar is known as "Orie Mbi-eka" which and it is the grand finalé of Oke-aku festival. On this day, people go out to supervise and do minor works known as "Mbi-eka ewu", in the farm. Before noon, every one is back home for refreshments. Afterwards, people come out to the village squares to meet their friends or relatives and watch cultural displays. Oke-aku festival of Ezza Ezekuna people is significant in many ways. It marks the transition from the period of scarcity of food symbolized by nsa-aku and old yams withered by long period of preservation to a period of prosperity represented by the mature and ready-to-be-harvested new yam. Oke-aku is also a period of stock-taking and re-direction. Oke-aku is a festival of love and peace; a period of reconciliation when wrongs are forgiven and broken relationships are mended. Above all, Oke-aku festival is a time for thanksgiving to the almighty and benevolent God for His graces over the ages and the previous year upon the people of Ezza Ezekuna. As Ezza Ezekuna people pray for a prosperous New year, they thank God for the gift of His Excellency, Engr. David Nweze Umahi (Ikenga Ezza Ezekuna) to Ebonyi State. Ezza Ezekuna people appreciate Governor Umahi for his labours of love on the entire Ebonyi people and the people of Ezza Ezekuna in particular. It is the desire of the people of Ezza Ezekuna that every Ebonyian, nay Nigerian, will use the golden opportunity of Oke-aku Ezza Ezekuna 2019 to genuinely forgive his/her neighbour; enlarge the circle of love and friendship; and promote our collective interests above minor passions and personal ambitions. These should be the watch-words of Ebonyi people as we continue in the progress match which the Divine Mandate administration of Gov. David Nweze Umahi has become for Ebonyi people.