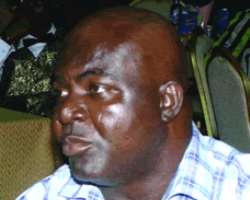 Sam Obeakheme
Shortly after the sudden death of former Head of State, General Sani Abacha, a movie entitled, Stubborn Grasshopper was all over the town. It was indeed an attempt on the life and times of the dark-goggled dictator. And it was successful, thanks to the creative ingenuity of the lead character, Sam Obeakheme, who did a wonderful job. He has since then starred in many movies such as When the Sun Set, Just a Night, Domitilla, High Street Girls, Blood Money, 1&2 and Mortal Inheritance among others.

With over 20 years experience in the industry, the Edo-born actor is working assiduously behind the scene as a producer of strictly traditional movies like Ikeke which is already in the market and Okhe, which is in the works. Obeakheme spoke to Blockbuster recently on a wide range of issues in the industry and confessed that playing Abacha has indeed brought him into the limelight. Excerpts:

Youthful pranks
I played a lot of pranks in my youthful days. My late father was a soldier and I grew up in the barracks. Your parents just allow you to play around and acquire street wisdom. I lived in Ajegunle, Lagos. We did a lot of nasty things and by the grace of God I was able to outgrow them. I remember when I was in primary school and if you saw my dad then, he was an aggressive looking soldier and I had that believe that if anything happens to me, I would have a protector in him.

During the inter house sports, you see girls standing and you would stay behind them. When they push a girl and she falls, the only thing you enjoy doing is to peep and see the kind of panties she's wearing. You'll gladly announce that the girl is wearing a red pant and I did that mistakenly to a teacher's daughter. When they called us out on a Monday morning at the assembly, and in the course of flogging me, the cane landed on my eyes and it got swollen, I said yes, this is when I will show this man that my father is a soldier. I got home, as my father was coming out of the room, I stayed by the staircase and he saw me. He asked what happened to my swollen eyes and I told him. He was mad and I was happy that he would deal with the teacher. The next day, he drove me in a Land Rover straight to school. When my colleagues saw my father and I, they were happy. Unfortunately, when we got to the school, my father entered the class and went straight to the teacher who now told him the nasty thing I did. My father said is that what he did? The teacher said yes.

Then we had very hefty boys in primary six. He called some of them to come into the class, I was in primary three then, my father said they should line up the desks in the classroom, they did, I was still watching. Later, my father asked the teacher to look for very good canes, which the man gladly brought out. He then told the teacher to give me 10 strokes of cane and in giving me the strokes, they must hold my hands and my legs. It was like the ground should open and swallow me. When I got home, I called my mother aside and asked if he's really my father. My mother also did not support me and that was it. Since then, anything I do, I bear it.

Revival of traditional movies
Film production is not something that can be done without finance and if we must finance film, the people that have to be involved should be indigenes of those areas because promoting culture is not a one man thing. Although, somebody may have the idea, some other people have to give him the financial backup which is what many of us are lacking. Before now, you cannot really defend any proposal before any bank and get any money out. We believe that people from different areas that are financially well off should see how they can support their indigenes who are in film production to make sure they bring out more traditional stories to promote their culture apart from the financial aspect which must surely come.

On Okhe
Okhe is about certain norms in my place in Edo North that is applicable to the entire country concerning local politics and culture. Okhe has to do with a particular title called Okpi. Okpi is like a traditional head in the community in Edo North that when the seat is vacant, they invite families to vie for it and the minimum is always two and these two families have to elect some elites that have achieved so much and have contributed to the society. It has to do with two close friends contesting for the same post but one is very rich while the other person is an average man. At the end of the day, the rich one was seen as the person that would win the seat but when they now went into the nitty-gritty of culture, the average man was better off and he got the post. But the better thing is that at the end of the day, they embraced themselves. The main aim of everything is the betterment of the community and that is how the Nigerian politics is supposed to be. The movie is in English but in Edo setting. The only difference is that the names are Edo. A Pete Edochie will answer Osigbeme, a Rita Dominic will bear Omoisi, just to give that local touch and intermittently the characters no matter where they come from in any part of Nigeria will be taught a little bit of that language to mix with their lines.

Lifeline
Before now, film marketers were strictly marketers who were looking for films to sell in their shops and when a producer approaches them that he has a nice story, they finance the production and share profit with him but unfortunately it is not like that now. A lot of things have gone wrong and this whole thing started from the marketers who now dabble into production and even ask producers to sell their rights to them after producing and they just pay him stipends.

The Federal Government has shown interest in the industry based on the recent workshop we attended with the Export Promotion Council, and members of Association of Movie Producers have met with some stakeholders like Silverbird Cinema and National Theatre to know how to work on these things and we have come up with very good results. For instance, unlike the former culture of just releasing a film immediately into the market, now if you produce a film, the first thing you have to do is premiere in major states in the country, then you do the cinema show for three or more months before thinking of releasing it in CDs. After all these, you can start selling rights to television houses.

Arrest is propaganda
Stubborn Grasshopper is a film that has to do with a dictator. It is all about a late dictator, and playing the lead role was not easy because I had to go to the library of some media houses to get some of the clips so that I would be able to get into the character.

It was very challenging to get some of his mannerisms, talk like he talked, walk as he walked and some other things. I have to be honest with you, playing the dictator is what has made me popular. The issue of arrest was actually propaganda. The producer was very smart. He used the arrest matter as a hype to sell the movie. There were stories in the newspapers that some people were looking for me based on my role in the movie but I know it was propaganda.

Famous but not rich
To be honest with you, I have nothing materially. But the only happiness I have is that I am famous. What I am begging God for now is money to support the fame. The truth of the matter is that before now, we were doing shows. We were not doing business. Show in the sense that it gladdens any artiste to do what he has to do with little or nothing to show for it. But now, we are into business. And that is part of why most of my fans are not seeing me in the movies because some producers cannot pay me. If you have to pay me, I have a lot of things at stake. I have to take care of my immediate family and if money is not coming around, there is nothing I can do. As I am speaking with you now, I run a restaurant. I supply drinks to people organizing parties, just to make sure I bring food to my table.

On crisis in AMPCOP
Some of us are too proud to lose elections and when we lose, we think we must stay there by force, and some of us think that the best thing for us to do is to go and form different bodies to counter the original body they belong to but it is not like that. For instance, if I contest for the president of Nigeria and I lose out, do I have to create another Nigeria? The truth of the matter is that if you lose out, you contest again and if you are still in that organization, try to contribute and make the organization better instead of going to form a different body. This is the same thing that is applicable to other bodies that are having similar crisis in the entertainment industry.

Role model
Uncle Sam Loco Efe is my role model. I ask him a lot of questions to better my own skills. Internationally, Eddy Murphy is my role model because of his ability to switch into different character and still be himself.